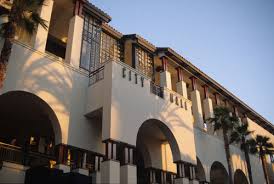 The Culver City council chambers were crowded for the LWV/Ask2Know Candidate Forum on March 3, 2014 with both organizations stepping into a new format and a new partnership. All four candidates running for the April council election were present; Jim Clarke, Jeff Cooper, Christopher Patrick King, and Gary Abrams. The students in the audience seemed to outnumber the adults by a large percentage, and while it may have been a great exercise in civic education, there may not be much election day benefit to the candidates in appealing to people too young to vote.

With former LWV president David Holtzman presiding as moderator along side Sal (first name only, as an under-18 youth moderator presenting on camera) offering questions, the candidates all had ample opportunity to clarify their positions on some controversial issues.

The first question had to do with banning fracking, the environmentally hazardous method of extracting oil that has been banned in Los Angeles. As both of the incumbents, Cooper and Clarke,  have spoken often and participated in council actions to ban fracking, it seemed to be a chance for them to re-emphasize their commitment on the issue. King and Abrams were both in agreement that fracking was bad, and while Culver City has only a small slice of the Baldwin Hills Oil Field under it’s jurisdiction, everyone agreed that working with Los Angeles would be the key to success.

When asked what they would do about broken sidewalks, the incumbent candidates spoke about the ficus trees that have caused much of the problem, and how long range planning was now being implemented to replace a few of the trees at a time. Clarke also mention an innovation in rubberizing sidewalks, so that root problems might be minimized by concrete than can bend and not break.

A question from a student about marriage equality asked the candidates if they would officiate at a lesbian wedding got a loud and enthusiastic yes from everyone, leaving another non-issue completely resolved.

While the questions offered up to this point were simply a broad base for each candidate to say very similar if not identical things, some controversies were reflected in the next few questions about affordable housing, rent control and the Ice Arena.

Sydney Dukes asked the candidates about affordable housing, saying “Culver City is a very popular place to live; do you believe we should keep it as an exclusive upper class community or add in more affordable housing?”

Clarke took exception to the idea of Culver City as exclusive. “We are a very diverse community, and if we can make any progress on the important issue of affordable housing, the state [of California] is going to have to give us something like re-development.”

Cooper noted that the city had provided more affordable housing in the last few years than it had in the decades before, and stated “on the Westside, Culver City’s rental prices are still among the most affordable,” but also noted “we don’t want to increase our population exponentially,” noting that the city is capable of serving the current residential base, but more residents would be a greater need for services.

King stated that “As soon as you say the words ‘rent control’, people get their boundaries up, and they stop listening, it’s a very divisive issue. I have concerns on both sides. There’s a tension between preserving local character and fostering development.”

The issue of the Ice Arena came before the candidates, and Clarke began by quoting City Manager John Nachbar as saying “This was the most difficult situation he had encountered in his entire career.” Clarke noted that the most important factor to the city was the public safety issue, and that the operator had stated the intention “to just walk away and let it melt.”

Cooper agreed that he “wanted nothing more than for the ice rink to remain an ice rink, but we need to know that it’s safe. We were there on Friday [Feb 28, 20014] to do a core testing of the ice, and the owner would not let us do it. This is one of the most frustrating experiences I’ve ever had.”

Abrams voiced doubt that the city had played fairly, noting that his mistrust of the council led him to think that there was something wrong in the way the city had handled the problem.

King stated that a part of his platform in running for office was about “the importance of public participation; lots of people are very involved in this issue, and the discovery of the zoning variance does keep the hope for the rink open. ”

With the last question in regard to a need for a crosswalk on Washington by the King Fahd Mosque, it fell to the sitting mayor to say that he would be meeting with mosque officials and police the following day to discuss the matter. While an agreement about a sidewalk was not a given, it was already being looked into.

The forum gave the audience a chance to investigate the candidates for council, and find out where they stood on some of the issues, and when they are old enough to vote, they will have some great background on how to choose a candidate.