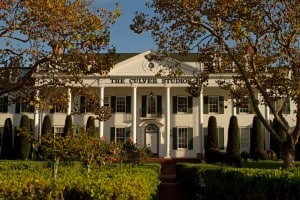 The studio where the Atlanta fire scene in Gone With The Wind, Citizen Kane and X-Men: First Class were made has new owners today after a long sale process, according to Deadline Hollywood. While Culver Studios declined to comment on the upcoming finalization of ownership to Hackman Capital Partners or the future of the production property, sources tell me that the 13 soundstages will be likely shuttered for good over the next 18 months to two years after existing productions wrap. ABC’s Marvel’s Agents Of S.H.I.E.L.D., CBS’ Extant and other productions now in residence there will see their current agreements and leases honored. Speculation is that the 14-acre lot at 9336 W. Washington Blvd will be turned into either office space or condos after that. The property is currently owned by Lehman Brothers Holdings Inc who were among a group who purchased the studio from Sony in 2004. Almost new owners privately-held investment firm HCP specialize in industrial real estate.

The studio was built in 1918 by silent movie producer Thomas Ince and through the years was owned by Cecil B DeMille and RKO Pictures (at one point that studio was owned by Howard Hughes), Desi Arnaz and Lucille Ball’s Desilu Productions, and Grant Tinker and Gannett, who renovated the property in 1986. Sony acquired it in 1991 and held on to it for 13 years.  The facility currently offers production and executive office space, conference rooms, a commissary and a fitness center. Stay tuned on this one.