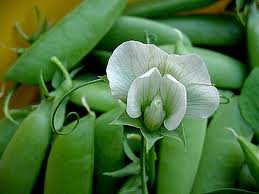 Sugar snap peas have become an ubiquitous – and delicious – addition to vegetable platters. Plumper than a snow pea, with a soft, edible shell unlike their cousin the English pea, it seems like they have been around forever.

In truth, they are the most recent addition to this trio of springtime delights. And like many wonderful things, they were discovered by someone who was searching for something entirely different: a straighter snow pea.

Snow peas are thin pea pods containing undeveloped peas. They are tender enough to be eaten whole, pod and all. In contrast, English pea pods become hard when mature, so that only the peas are edible. Both snow peas and English peas have been grown for centuries. Archeologists have found evidence that they were grown during the 12th Egyptian dynasty, and some trace their origin back to the present Thai-Burmese border 12,000 years ago.

Snow peas are very popular vegetables in American Chinese cuisine. In the 1960’s, American industrial plant scientist Calvin Lamborn was working on developing straighter, flatter snow peas when he ran across a rogue plant. He crossed the rogue snow pea plant with an English pea plant. The result was a plant producing plump pea pods which remained edible when fully mature. The sugar snap pea was introduced in 1979, and has skyrocketed to popularity, eclipsing its thinner, less flashy cousin. Sugar snap peas have become an ubiquitous addition to vegetable platters and brown bag lunches. You can steam them for a minute or two, or saute them in a bit of butter. Their natural sweetness requires very little extra effort in the kitchen.

Their ancestor, the humble snow pea, is a wonderful vegetable which can stand on its own. It is primarily associated with Chinese cuisine, but it can also stand on its own or in combination with ingredients from other cuisines.

Stop by the Tuesday afternoon downtown Culver City farmers market and pick up a basket or bag full of snow peas so you can try some of these delicious, farm-fresh recipes. You can stuff them with seasoned goat cheese for an appetizer, toss in some pine nuts and garlic for an italian-inspired side dish, or add them to other ingredients for an Asian-fusion stir-fry.

Rinse the snow peas and pat them dry with a towel. Cut off the tips and pull the strings off the edge of the pod. Heat a large skillet over medium-high heat and pour in the olive oil. Heat the olive oil for 30 seconds, and then add the minced garlic. Cook, stirring occasionally, until the garlic is softened. Remove the garlic with a slotted spoon and set aside. Add the snow peas and stir to coat. Cook for a minute or two until they just begin to soften. Add the pine nuts. Continue to stir until the pine nuts just begin to start changing color. Add the reserved minced garlic and a generous pinch of salt. Serve warm.

Steam snow peas until just tender. Blanche in cold water. Dry. Remove the steams and open the pods along one edge. Mix the herbs or zest and pepper with the softened goat cheese. Using a small spoon or a tube, fill each opened pod with the goat cheese mixture. Serve at room temperature.

This recipe can be made with either sea scallops or bay scallops. If you’re using large scallops, slice them into strips about 1/4 inch thick. You don’t need to slice the smaller bay scallops. Rinse and drain the snow peas. Remove the strings and cut the pods diagonally into 1-inch lengths. Heat a small saucepan or skillet over medium-high heat, then put in 1 T. of the peanut oil or butter. Add the chopped ginger and sauté for 30 seconds. Next, add the garlic and sauté for another 30 seconds. In the same pan, add the wine and fish sauce, and reduce the mixture by half, stirring often. Remove from direct heat, but keep this hot, stirring occasionally so that it doesn’t burn. Next, heat a skillet large enough to hold the scallops in one layer, and melt the rest of the butter over moderately high heat. Add the scallops and freshly ground pepper to taste. Then add the snow peas and stir-fry until the peas have change color and the scallops have turned opaque, about 2 minutes. Be careful not to overcook the scallops. Add the sauce and lime juice, and stir everything for a few seconds, until well-mixed.

Katie Malich has been known to toss a handful of trimmed and stemmed snow peas in her mixed salads. They’re a natural for Chinese chicken salads, of course, but julienned snow peas and scallions mixed with shredded Napa cabbage make a wonderful twist on the traditional cole slaw.

Today is the longest day of the year in the northern hemisphere: the summer solstice. The earth rotates on an axis, meaning that its poles move closer to the sun as summer approaches, and then …[READ MORE]