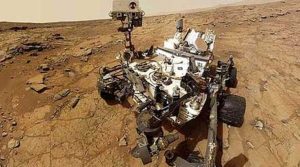 Curiosity took the images with its Mast Camera on Sept. 8. The rover team plans to assemble several large, color mosaics from the multitude of images taken at this location in the near future.

“Curiosity’s science team has been just thrilled to go on this road trip through a bit of the American desert Southwest on Mars,” said Curiosity Project Scientist Ashwin Vasavada, of NASA’s Jet Propulsion Laboratory, Pasadena, California.

The Martian buttes and mesas rising above the surface are eroded remnants of ancient sandstone that originated when winds deposited sand after lower Mount Sharp had formed.

“Studying these buttes up close has given us a better understanding of ancient sand dunes that formed and were buried, chemically changed by groundwater, exhumed and eroded to form the landscape that we see today,” Vasavada said.

The new images represent Curiosity’s last stop in the Murray Buttes, where the rover has been driving for just over one month. As of this week, Curiosity has exited these buttes toward the south, driving up to the base of the final butte on its way out.

Curiosity landed near Mount Sharp in 2012. It reached the base of the mountain in 2014 after successfully finding evidence on the surrounding plains that ancient Martian lakes offered conditions that would have been favorable for microbes if Mars has ever hosted life. Rock layers forming the base of Mount Sharp accumulated as sediment within ancient lakes billions of years ago.

On Mount Sharp, Curiosity is investigating how and when the habitable ancient conditions known from the mission’s earlier findings evolved into conditions drier and less favorable for life.

MARS IN YOUR NIGHT SKY. As soon as it gets dark enough to see stars, look a bit west of south and you will see three bright objects, fairly close together. The brightest of these is Mars, having a slightly reddish tint. Above and to the right is Saturn, and nearby is a star, Antares in the constellation Scorpius.

This is a good chance to test your ability to tell a star from a planet: if it twinkles, it’s almost certainly a star; but a planet’s light will usually be steady, not twinkling. Distortion caused by the light passing through miles of windy atmosphere causes starlight to twinkle; the light from a planet, coming from a wider object, is less likely to be blocked by the atmosphere.

Over the next few days and weeks, Mars, Saturn, and Antares will slip westward night by night until they are lost in the twilight. This happens because Earth is moving eastward in its orbit. Mars’ orbit takes it eastward too, but since its orbit is twice as large as ours—it takes about two Earth-years for Mars to get around the Sun—it can’t keep up with us.

Does all this celestial geometry boggle your mind? Not surprising—it took humanity at least 1500 years, from Ptolomy to Copernicus, to figure it out! But it’s a great exercise for our powers of reasoning and mental visualization.

Nothing is more mind-expanding, for learners young or old, than getting into astronomy. For a great listing of astro-events and clubs in the Los Angeles area, check out this NASA website: nightsky.jpl.nasa.gov/clubs-and-events.cfm

NASA’s Stardust-NExT spacecraft is nearing a celestial date with comet Tempel 1 on Feb. 14. The mission will allow scientists for the first time to look for changes on a comet’s surface that occurred following …[READ MORE]