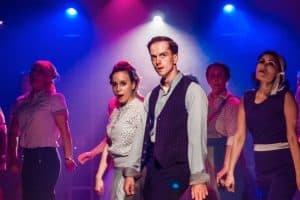 Block Party highlights some of the remarkable work being done on other, more intimate theatres throughout Los Angeles by fully producing three previously staged productions. The three shows receive the full support of Center Theatre Group and its staff in order to fund, stage and market each production. Subsequent Block Party productions will be The Fountain Theatre’s production of “Citizen: An American Lyric” running April 28 through May 7 and The Echo Theater Company’s production of “Dry Land” running May 12 through May 21.

“Failure: A Love Story” chronicles the lives, loves and deaths of the three Fail sisters and the one man who fell in love with each of them. Set against the backdrop of 1920s Chicago, this touching, whimsical tale explores the impermanence of life and the permanence of love.
The cast of “Failure: A Love Story” includes Joe Calarco, June Carryl, Cristina Gerla, Kristina Johnson, Margaret Katch, Denver Milord, Gregory Nabours, Theodore Perkins, Kurt Quinn, Brandon Ruiter, Nicole Shalhoub, Gina Torrecilla and Brittney S. Wheeler. Scenic design is by JR Bruce, costume design is by Allison Dillard, lighting design is by Matthew Brian Denman and original music, arrangements and music direction is by Nabours. Emily Abbott is the production stage manager.

For Tickets, go to centertheatregroup.org