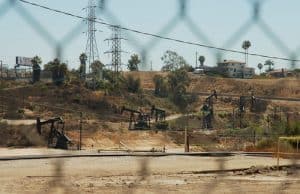 If there is one constant overriding environmental concern for Culver City, it is the Inglewood Oil Field. Covering almost a thousand acres and sitting next to Kennth Hahn Park, the area is one of the largest urban oil fields in the world, a working site since 1924, producing more than 7,000 barrels a day. While Culver City has jurisdiction over slightly less than a tenth of the site, it’s legal standing does allow for significant interaction with the entities extracting oil.

And there have been several. Now under the third owner in five years, the oil field was sold by Plains Exploration and Production (PXP) to Freeport-McMoRan Oil & Gas in 2013, and then to current owners Sentinel Peak Resources last year. Sentinel Peak is the party requesting that Culver City hold off on releasing the scheduled regulations for public comment, then giving the company time to study the field before regulations go into process.

The meeting, scheduled for tonight at Culver City City Hall at 7 pm and open to the public, will consider Sentinel Peak’s request to hold off.  The history between the property and the city does not forecast a success for the company.

According to Council member Meghan Sahli-Wells, “The oil company is asking the city to halt its release of oil drilling regulations for public comment while it conducts a comprehensive study of the oil resources in the field and under our neighborhoods. If this request is granted by the City Council, it would be a drastic about-face in the city’s years-long process of drafting oil drilling regulations to protect the community, environment and public health.”

Sentinel Peak’s request to the city, which covers only the 80 acres of oil field that fall into city boundaries (and therefore, city jurisdiction) notes that “As we understand it, Culver City seeks to update its oil drilling regulations through a Specific Plan for the 80‐acre oil and gas site in  the City currently being operated by Sentinel Peak Resources. The Initial Study for  the EIR describes the requirements for the draft Specific Plan.”

Sentinel Peak’s correspondence focuses on how the fossil fuel resources can best be maximized, a question already considered by both PXP and Freeport McMoRan.  “This prompts a series of important questions:  What is the potential future vision for this property? How
were 30 wells determined to be “full buildout”?  How were surface owner interests and existing oil rights factored in?  What physical features are proposed?  Could oil and gas production facilities be located alongside other beneficial uses of the remaining property? ”

The city has historically been staunch in putting safety first, while balancing the needs of the property owners to extract resources. The extensive history of lawsuits regarding the property and the concerns of the residents living nearby reaches back to the first wells drilled in the 1920’s.

Residents, particularly those in the Culver Crest neighborhood, have often addressed the council in regards to health concerns and aromas from oil field over the past five years.

How the council proceeds tonight will be the first chapter of the city’s dealings with Sentinel Peak, but only one more page in a long story.