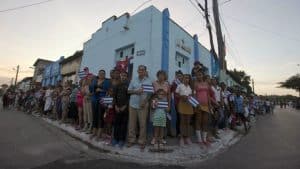 Change? Camaguey has changed since my visits in 2012 and 2014. Now, along the main street there is an ice cream shop, book store, cinemas – primarily for tourists, mainly from Europe, Canada and now some from the USA.

We rarely meet the Camagueyanos, save for those who serve tourists; hotel workers, bartenders, and taxi drivers, who convey us on pedi-cabs. But our group members are fortunate. Led by Rabbi ‘Sunny’ Schnitzer we join the remnant Jewish community here. We sing, eat and pray with them. We bring several large bags of medicines to supplement their pharmacy, which serves the entire city. I donate insulin syringes for pediatric patients, which are received by a local physician whom I have met before. The doctors here are well trained and work diligently, but basic supplies like sterile syringes are in short supply.

Cubans boast that they have the best music and dance, the best rum and tobacco, and the most beautiful people. Of course they are right. But we had few indulgences on December 1, 2016- our first full day on the island. Fidel Castro’s death was being observed with a 9 day period of mourning, which meant that there was to be no joyful music and no alcohol.

That night we headed off in the dark toward the baseball stadium to meet Fidel’s funeral convoy and attend a “cultural event.”
Much of the gathered crowd was made up of high school students, obliged to attend, with numbers of police and military. The mood was not somber, but rather respectful. Martial speeches blared in the background. There was a feeling of being at a historical event. The youthful students were pleased to speak with us about their studies and future plans. They appeared bright and hopeful. They enjoyed seeing North Americans in their remote town.

Interestingly there were few participants there old enough to personally recall the revolution. My conversations with elders were often somber. One spoke of expropriation of property, and a “government of theft.” A professor spoke of failed economic policies which “never change.” This sort of open criticism of the government was a noticeable change from past visits.
Cuba is an underdeveloped country. Not all of its assets and liabilities are political. The entire Caribbean area is challenged by poor economies which do not accommodate the needs of their populations, despite beautiful lands and people. Witness Puerto Rico, an American commonwealth, and bankrupt.

One hope is that as our countrymen and women visit Cuba, they will find, as I did, that the U.S. economic embargo has hurt the many poor people of that island, and spares the ruling class. Our mission, while small, directly touched and helped some Cuban people. Let’s bring assistance and compassion to the island directly, on a people to people basis. The Cuban people have suffered long enough.