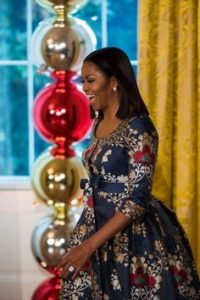 As promised, the second installment of ‘Culver City Kids Visit the White House’

After missing two days of school, I am on a plane, going back to LA, and coming from an unforgettable experience. My name is Emilien Sahli, and Michelle Obama said hello to me. I should explain…

On the last day of Thanksgiving break, my dad called me into his office, and told me that we had an opportunity to meet with Michelle Obama in Washington DC, and that we were leaving the next day. Kidscoop Media, a group that takes kid journalists to interview and report on famous people, chose me to see the Christmas decorations and Michelle Obama at the White House. After that great news, we rushed to the store to buy a suit and cold weather clothing. I went to school the next day, trying not to brag. That night we packed and went to the airport to leave for DC. We flew all night, arrived exactly on time, ordered a Lyft and headed for the hotel to drop off our bags. We met Michelle Mayans, the head of Kid Scoop Media, and two other kid reporters at a coffee shop right across from The White House. We crossed the street and there it was in all its glory. We walked through security, and there we were at the White House!