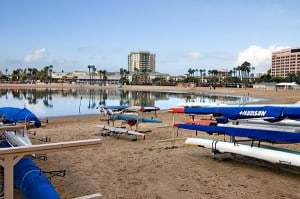 Californians heading to the shoreline this weekend will be heartened by yet another improvement in water quality at beaches statewide, according to data released by environmental group Heal the Bay in its 26th annual Beach Report Card. Unhappily, both Mother’s Beach at Marina del Rey and the Santa Monica Pier stayed on the list of worst beaches in the state.

Heal the Bay analysts assigned A-to-F letter grades to 456 beaches along the California coast for three reporting periods in 2015-2016, based on levels of weekly bacterial pollution. Some 95% of beaches received A or B grades during the high-traffic summer season (April-October 2015), slightly above the statewide five-year average.

The severe drought now impacting California appears to be a major contributing factor to improved water quality at beaches statewide. With record low rainfall reducing the amount of polluted runoff funneled into our seas, beach grades across the state are consistently outperforming their averages.

Overall, only 12 of the 456 beaches (3%) monitored statewide received D or F grades during summer dry weather, when most beachgoers typically use the ocean. High bacteria counts at these sites are linked to such potential illnesses as stomach flu, ear infections and major skin rashes.

To avoid illness, ocean-goers can check the latest water quality grades at their favorite beaches, based on the latest samples, each week at beachreportcard.org.

Heal the Bay also urges beachgoers to avoid enclosed beaches, which are often riddled with harmful bacteria, and to swim at least 100 yards away from flowing storm drains and piers.

Heal the Bay’s annual Beach Bummer List, a ranking of the state’s 10 most polluted beaches, is split among beaches in Southern and Northern California. Cowell Beach in Santa Cruz has the dubious distinction of topping the list for a third year in a row. New entrants this year include Shoreline Park at Shelter Island in San Diego and Monarch Beach near Salt Creek in Dana Point.