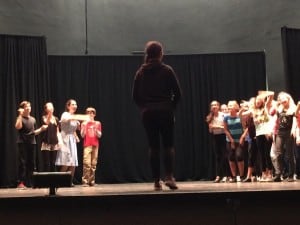 Somewhere over the rainbow, there’s a place where students are, literally and figuratively, running the show. Over the rainbow is not so far away, however, it’s right here in Culver City. The idea that a thirteen-year-old can manage an entire Broadway production sounds like make-believe, but it is reality. As schools gear up to ensure that all students meet academic standards by putting interventions in place when a student does not meet performance expectations, schools also must figure out what to do when students HAVE mastered all the standards. Educators look for so-called “extension” activities. Allowing students to extend their gifts and talents, whether it be singing, dancing, mathematical calculations, memorization of terms for a test, writing skills, or scientific reasoning, by putting on a theatrical production extends them all. It also enriches the lives of all involved, from those who do it, to those who support it, to those who enjoy it.

In this column, I have written on several occasions about my sometimes unorthodox views of education, about the need for enrichment opportunities for all students during the school day, and about the absolute necessity of ensuring that we as educators address the needs of the “best and brightest” students along with those of students who may need academic intervention to master subjects at the “Common Core” standard levels. And I keep writing about it, because people and times change, especially in education, and I want to preserve what we created as a blueprint for the future. We made history, and I am its historian.

When Isa Berliner was in 6th grade, she assisted current 10th grader Mariko Rooks with the production of “Once on This Island.” It was Mariko’s second year of success; she’d produced an original play, entitled “Catching Butterflies” when she was in 7th grade, during the 2011-12 school year, when Culver City Middle School decided to extend their “SSR” (Silent Sustained Reading) period to thirty minutes, in order to provide intervention for low-scoring California State Test (CST) takers. As GATE (Gifted and Talented Education) Coordinator, I asked, “What if…we created some activities for students who, conversely, excel at taking the CSTs?” Principal Jon Pearson gave me the go-ahead, and that’s where it all began.

As GATE Coordinator, I knew of Mariko, and I had seen her acting in an after school program play, I knew of her love of the theatre, and her academic capabilities. I proposed that Mariko gather together a team and produce a play; she looked at me like I was crazy. But I am crazy in my belief in student empowerment, and the need to provide enrichment opportunities within the school day. Mariko not only produced the two plays to rave reviews, but passed on the torch to then-6th grader Isa Berliner. Now, with last year’s hugely successful Seussical under her belt, Isa was ready to take on the Broadway production of The Wizard of Oz this year. Mariko named the student production company “CCMS Performances.” At one point, I argued that it be called “CCMS Performances & Productions,” and was told that my suggestion would be “taken under advisement.” Meanwhile, the name has stuck. I have taken to calling myself “founder” of “CCMS Performances,” after all, I don’t teach it as a class, and never did. Nor have any other teachers, although some of us have been called upon to supervise the minors as they work in various venues at CCMS and CCHS. I’m not even in the job at CCMS anymore, and Isa introduced me to the cast and crew the other day as…the paparazzi.

It’s been a tough year in the world of CCMS Performances. Inevitably, Isa’s 8th grade co-producers for Seussical, Celine Cuadra and Emily Wulf, graduated last year. Principal Jon Pearson moved on to a new job in another district, and, yours truly moved on to her new job at Culver Park High School/Culver City Adult School/CCUSD iAcademy. CCMS staff voted on a bell schedule that ultimately reduced the amount of time devoted within the week for intervention or enrichment in favor of longer regular class periods on Mondays. As the school dedicated its energy and efforts to creating their current “PAWS” program, time within the school day for Isa and her team to work on the play was radically diminished. Isa negotiated a way to utilize the new early-release Wednesday to allow the students to work on the show on campus after school.

You’ll definitely want to see the show itself, and your admission supports the cost of the current production and the continuation of similar productions in the future. I promise that it will be worth your while on all counts; it is the Broadway version of The Wizard of Oz, not The Wiz, nor Wicked, and is a unique and very Culver City choice on Isa’s and her crew’s part, this being the home of the film original. The students are attempting four shows this weekend, extending opportunities for both the audience, and for the cast and crew, to enjoy the fruit of their hard work.

This week, I’ve had the opportunity to sneak some peeks during rehearsals. Every year, I’ve loved “hell week” as much as the show itself. Dropping in to Robert Frost and seeing bits and pieces of the show, watching students 100% focused – “engaged” is the term we use in education – on everything from: costuming, to set design, to make up, to practicing lines and dance moves. Although last year’s co-producers Celine and Emily graduated to 9th grade already, their moms were on hand all week providing “craft services” (film industry term for meals) for the students every night. Isa also “employed” her mom, professional musician and professor Dr. Tania Fleischer, as conductor of what this year is not “just” (as if “just” were appropriate for anything related to this production) the CCHS jazz band, but an entire orchestra, made up of CCMS students, CCHS students and community members.

Buy your $10 ticket, for ages 5 and over, at the door. Snacks, drinks, promotional T-shirts and DVDs of last year’s production, Seussical, will be sold in the lobby before and after the show, and during intermission.