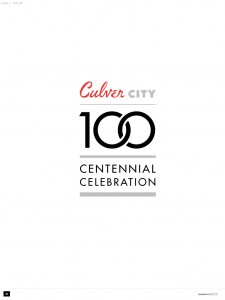 The Culver City Council approved the design of a logo for the Culver City Centennial. The logo was presented by Jim Clarke, president of the Culver City Centennial Celebration Committee, a non-profit organization created to help plan and coordinate activities during the City’s Centennial year beginning September 20, 2016 and running through September 20, 2017, the official date of incorporation. According to Clarke, the logo will be used to identify events and projects that are part of the “official” celebration, as well as to denote Centennial sponsors and supporters. “We wanted a logo that could be clearly identified as Culver City and was easily readable. The linking 0s in 100 can also be interpreted as two Cs standing for Culver City and Community and Commerce, two values of the City’s founder Harry Culver.”
The logo was designed by the Zehner Group, a Los Angeles-based company that has been hired by the Committee to also design and develop a Centennial website and assist in creating an overall marketing strategy. Goran Eriksson, chair of the Committee’s marketing committee, informed the Council the Zehner Group developed multiple designs which were first shown to the marketing committee and later to the Centennial board. Both groups unanimously approved the logo design presented to the Council. Eriksson also mentioned website should be completed and operational by June 1st.
Paul Jacobs, Committee Vice President, announced that the Committee had received 34 written proposals for events or projects during the Centennial. During the next few months, the Committee will be working with the applicants to finalize their proposals. He encouraged anyone with an proposal for a Centennial activity to contact the Committee at [email protected] or in writing to P.O. Box 4521, Culver City, CA 90231-4521.
The Centennial Celebration Committee board consists of Jim Clarke, Mike Cohen, Goran Eriksson, Paul Jacobs, Darrel Menthe, Terry Robins, Judy Scott, Jozelle Smith, Paul Tangalakis and Scott Wyant. The Advisory Committee members are Julie Lugo Cerra, Steve Rose and Chris Wilde (Harry Culver’s grandson). City Liaison is Shelly Wolfberg and our Committee consultant is Kathleen Tepley with the Los Angeles Consulting Group. The Committee meets monthly on the third Tuesday at 7 pm in the Dan Patacchia Room, 1st floor of Culver City Hall. The public is welcome to attend.