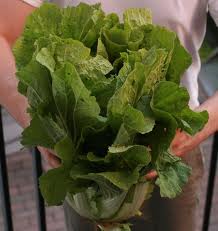 Chinese vegetarian cooking need not be daunting. I spent about 10 minutes preparing a shredded three taste salad without a mandoline, and had a delicious mushroom dish finished about under 25 minutes. Sure, some of the vegetables might be unfamiliar, but don’t let that stop you from experimenting. I’ve received great advice about cooking unfamiliar vegetables from the vendors and other customers at the farmers market. Asian home cooking showcases the freshest in-season produce, so don’t hesitate to pick up some great-looking vegetables and ask for advice on how to use it.
If you do not have a wok, you can use a skillet or frying pan if the sides aren’t too low. I prefer cooking on a gas stove because of the greater control over temperature it provides. If you are using an electric stove, make sure to move your wok or skillet off the burner as soon as the dish is done to avoid overcooking it. Peanut oil is excellent for stir-frying, as it tolerates the heat well. Save that extra-virgin olive oil for another day; it is unsuitable for the high temperatures found in Asian wok cooking. Grapeseed oil also tolerates heat well. I have not used it in stir-fry, so I cannot comment about its taste in these recipes. When I don’t have peanut oil, I’ve substituted corn or canola oil with satisfactory results.

You may see two different shapes of Napa cabbage at some stands and stores. The wider, shorter one is the Chinese Napa cabbage. The Japanese Napa cabbage is more elongaed with thinner leaves. If you can’t find the Chinese cabbage, you can substitute the Japanese cabbage.
Before you start any other preparation, heat some water. Place the dried mushrooms in a bowl and pour hot water over them to cover. They should soak for around 30 minutes before being prepped.
Next, combine the sauce ingredients in a bowl and mix well. Set aside.
Separate the cabbage into individual leaves. Wash and drain thoroughly. Strip or cut the leaves from the ribs. Cut the ribs into julienne strips about as long as the black mushrooms are wide. Set aside. Thinly slice the leaves and set aside in a different pile or bowl. Julienne the bamboo shoots and place in small bowl. Next, julienne the red pepper and put it in another small bowl. You will be adding the vegetables needing the most cooking first, and the ones needing less time in the wok later.
Check the soaking mushrooms. They should have reconstituted, growing in size and becoming soft. Remove them from the water, rinse them briefly and dry them. Cut off and discard the stems. Cut the mushrooms into julienne strips.
Heat the wok over high heat for a minute. Add the peanut oil and coat the sides of the wok using a spatula. Add the minced ginger. Stir for 20 seconds. Add the cabbage ribs and the mushrooms. Stir well. Next, add the cabbage leaves. Mix well and cook for one minute, using spatula to make sure all the vegetables are exposed to the heat from the wok. Add the red pepper, mix thoroughly and continue to cook for another 2 minutes.
Using the spatula, make a well in the center of the vegetables. Stir the sauce, pour it into the well and mix thoroughly. As soon as the sauce thickens, remove the vegetables from the wok and serve immediately. (Recipe adopted from The Chinese Banquet Cookbook by Eileen Yin-Fei Lo.)

This delicate recipe takes full advantage of the fresh mushrooms for sale at the Tuesday Culver City Farmers Market. Mushrooms are low calorie, but they are high in nutrition. Mushrooms are very low in cholesteral and a good source of fiber, protein, and minerals like iron, zinc, manganese, phosphorus, potassium, copper and selenium. Chinese cuisine often relegates mushrooms to a supporting roles in Chinese cuisine, but they are stars in this recipe adopted from Celilia Chiang’s The Seventh Daughter.
King-oyster mushrooms are called almond abolone mushrooms or, less poetically, slab celery mushrooms in Chinese. They are large, tender, and have a relatively long shelf life. Their smaller cousin, the oyster mushroom, contains lovastatin, which helps reduce cholesteral. If you cannot find the king or regular oyster mushroom, increase the amount of the other mushrooms.
To begin, whisk the sauce ingredients together in a small bowl and set aside.
Heat a large wok or nonstick skillet over high heat. Add 2 T. peanut oil and swirl, then add the king-oyster mushrooms and saute until they begin to brown and have releaed their liquid. Stir and toss the ingredients as you saute. Transfer to a large bowl. Next, repeat the process for each type of the remaining mushrooms: heating 2 T. peanut oil, adding the mushrooms, then stirring and tossing each batch of mushrooms as you saute. Transfer each batch of mushrooms to the same bowl once they are cooked.
After cooking the mushrooms, immediately add the remaining 2 T. peanut oil to the wok and heat on high until a bead of water dances on the surface and then evaporates. Add the garlic and cook briefly until it is soft and golden, not brown. This will take about 15 seconds. Then add the mushrooms and their juices along with the remaining  dry sherry. Cook for 20 seconds, then pour in the reserved sauce and toss to combine. Remove the pan from the heat. Add a little bit of water if the sauce is too thick. Serve immediately.

Whisk together the soy sauce, balsamic vinegar, rice vinegar, sesame oil, sugar and minced garlic and set aside. Toss the vegetables and dressing in a bowl, mixing well. This salad is a refreshing addition to a family-style meal. I have adopted it from a recipe Cecilia Chang credits to Sichuan-born chef Bill Who. If you have Chinkiang black vinegar, use it. Otherwise, the balsamic vinegar is fine.

Katie Malich bought her first wok while she was in college. She still has it. If you are buying a new wok, make sure to season it first according to the manufacturer’s instructions.

Gung Hay Fat Choi!   Happy New Year! Thursday, February 3, 2011, marks the beginning of the Year of the Rabbit, 4708. Chinese New Year is a major holiday, in China, Taiwan, and other countries with …[READ MORE]

I’ve been enjoying wonderful cheese all week thanks to the merchants at the Tuesday afternoon Culver City Farmers Market. Soledad Goats is one of our newest vendors. You can’t miss their goldenrod and purple banner …[READ MORE]