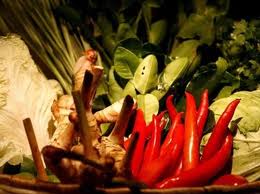 Last week, in honor of the Asian New Year, I loaded up an entire cloth shopping bag with fresh oriental vegetables.
My first stop was the Muoa family stand at the north-west corner of Main Street and Venice Blvd. The two young brothers were very helpful, explaining the taste of their more exotic varieties, and providing cooking advice. The family is Hmong, and carry a wide variety of asian produce and seasonings such as lemon grass, ginger, cilantro.
Since all the produce looked fresh, it was hard to narrow down my choices. They had sold out of the striking deep green and white baby bok choy I’d been craving. (Note to self: try to get to the market before 6 p.m. next week.) Luckily, there was some beautiful pale jade green baby Shanghai bok choy. My bok choy craving would be satisfied. White mustard greens, leeks, daikon radishes and a small Napa cabbage soon made their way into my bag. Actually, white mustard greens are not white; they are just more pale than other mustard greens.
I was tempted to pick up some Chinese broccoli – those thin stalks with dark leaves and small heads you see served from dim sum carts, drizzled with oyster sauce. Instead, I opted for a second type of Asian mustard greens: darker, a bit thicker, and less sweet. I wanted to do a taste test between the two varieties. White mustard greens are delightfully mild. What would the other taste like?
My next stop was the wonderful mushroom and edible fungus stand on the east side of Main side of Main Street. I love Chinese black mushrooms, wood ears, cloud ears, oyster mushrooms and enoki. Usually Asian cooks use dried large black mushrooms and edible fungus. Soaked in hot water for 15 minutes, they plump up to twice their size or more. But you can find them fresh here at the Culver City Farmers Market among the cornucopia of wild mushrooms.
These edible fungi have been a part of Chinese cuisine since the sixth century, common era. Both types are thin and wavy, even crinkly, with a slightly thicker portion where they attached to the tree. Wood ears are the larger of the two, with a black top and brownish tan bottom. The smaller cloud ears, are black all over, the top a deep shiny black and the bottom a duller, lighter shade. You may have noticed a thin, crunchy dark vegetable in hot and sour soup. That was a wood or cloud ear, cut into strips. Mild tasting on their own, they absorb other foods’ flavors and add textural contrast to dishes.
The Asian New Year is traditionally celebrated for a fifteen day period. The seventh day of the Asian new year is know as the common man’s birthday. — the day when everyone grows a year older. For Chinese Buddhists, it is another day to avoid eating meat. In their cosmology, it is the birthday of Sakka, lord of the divas. In 2011, the seventh day of the Year of the Rabbit falls on February 10. From the Farmer’s Table contains several easy vegetarian recipes featuring ingredients available at the Culver City Farmers Market.

Katie Malich has no problem eating her vegetables, especially in Asian cooking.

From the Farmers Table

From the Farmer’s Table- Recipes by Katie Malich

Chinese vegetarian cooking need not be daunting. I spent about 10 minutes preparing a shredded three taste salad without a mandoline, and had a delicious mushroom dish finished about under 25 minutes. Sure, some of …[READ MORE]