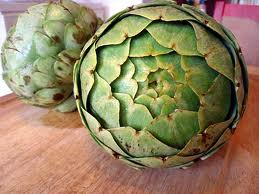 That’s all I could think as I gazed lovingly and hungrily at the displays of jumbo fresh-picked Globe artichokes at the Tuesday Culver City Farmer’s Market. At $4 a head, I could make an entire meal or a generous party appetizer out of one of these ginormous artichokes.

A true confession: I am one of those people who will drive out of my way to make a pilgrimage to Castroville, “The Artichoke Capital of the World,” whenever I am going to Monterrey or Santa Cruz.

As much as I love working my way through the leaves of a super-sized choke to get at the delicious heart, it was on one of my Castroville pilgrimages that I first discovered that less can definitely be more. Always on the lookout for a bargain, I picked up a very large bag of smallish artichokes for the price of one jumbo choke.

I had always associated small artichokes with those small jars full of marinaded artichoke quarters drowning in vegetable oil. OK in small doses when well-drained and tossed in a green salad, but nothing to write home about.

The fresh baby and small artichokes introduced me to another world of artichoke cuisine. They were wonderful quartered and trimmed (no sharp pointy ends spoiling my meal, thank you very much) and sauteed in a bit of extra virgin olive oil with a small, sliced clove of garlic. Grilled, they made a marvelous side dish to accompany grilled chicken or fish.

I’m at a loss for words to describe their taste to people who have never eaten fresh artichokes. Delicious. Complex. Satisfying. Believe it or not, some people have tried fresh artichokes without falling head over heels in love with them. Some find that pulling off leaf after leaf and drawing each one through their teeth to scrape off the delicious fleshy part is a lot of work. Others might be taken aback by the lingering sweetness that occurs after eating an artichoke. Most people enjoy that taste, but it has been known to drive serious wine lovers to despair while searching for suitable wine parings. Most people will find that even a sip of plain water tastes sweet immediately after eating an artichoke.
The sweetness effect is caused by the compound cynarin as noted in a 1972 article in the journal Science. Indeed, savvy restauranteurs have developed menus taking advantage of the cyanininduced sweet tooth. At a recent dinner with friends, every appetizers our host ordered for the table contained artichoke in some fashion or another.

I don’t know about you, but I intend to enjoy my first Globe artichoke of this spring’s artichoke season boiled, with just a tiny bit of melted butter.

Among the mandatory stops on Katie Malich’s Castroville artichoke pilgrimage is the World’s Largest Artichoke, a roadside attraction – and, not incidentally purveyor of artichokes.

Fresh figs are in season, and you’ll find heaping baskets of both black and green varieties at the Tuesday Culver City Farmers Market. I was in my 20’s when I had my first fresh fig. …[READ MORE]

Some holiday traditions are fixed in stone. At my college friend’s holiday table I will always find Grandma Eddie’s German-inspired green beans, simmered with bits of bacon and onions. Another friend’s Central American heritage is …[READ MORE]

I had a request for chicken soup recipes this week. Cold and flu season definitely seems to be with us now. Buy plenty of oranges and citrus as well as dark green and orange vegetables …[READ MORE]