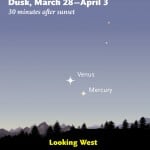 Venus and Mercury Pair Up in Twilight

For the next week, the two closest planets to the Sun will shine together low in the twilight after sundown. Anyone can see them; they’ll form an eye-catching pair. You’ll just need a clear sky and an open view toward the west, about 30 to 60 minutes after sunset.

“Mercury is pretty hard to spot most of the time, so a lot of people have never recognized it in their lives,” says Alan MacRobert, a senior editor of Sky & Telescope magazine. “Now’s your chance. This is as good as Mercury gets, especially with Venus marking the way.”

Venus is the brighter of the two planets. It is the famed “Evening Star,” currently making its way out from behind the glare of the Sun into twilight view.

Look for Mercury almost directly to Venus’s right from about April 4th through 10th. (This is for the latitudes of the United States, Canada, and southern Europe.) Their exact orientation will depend a bit on your latitude.

They’ll appear closest together on April 3rd and 4th, separated by about the width of two fingers held at arm’s length (3 degrees).

The crescent Moon joins these two planets on April 15 and 16. Mercury is just below the Moon on the 15th, and to its lower right on the 16th. The Pleiades star cluster, which marks the shoulder of Taurus, the Bull, rounds out the view. It stands above the Moon on the 16th.

By April 10th Mercury will be fading rapidly, as its orbit takes it between Earth and the Sun and we’re able to see less and less of its sunlit side.

Although Mercury and Venus appear close together, they’re not. Venus is currently about 1.5 times farther away. As of April 3rd, Mercury and Venus were 94 million and 146 million miles from Earth, respectively. That means it takes their light 8.4 and 13 minutes to reach us.

Because Mercury is always so close to the Sun, it is a difficult world to study. Most research telescopes can’t aim close to the Sun because sunlight would overpower their electronic instruments.

By far the best views of Mercury come from spacecraft. Mariner 10 flew by Mercury three times in the 1970s, and MESSENGER has made three passes of the planet in the last two years. MESSENGER will enter orbit around Mercury next year, providing continuous coverage of the hard-to-study planet.

Three reasons conspire to make Venus shine so much brighter than Mercury in our evening sky, despite its greater distance from us at present. It is about twice the diameter of Mercury; it is covered with brilliantly reflective white clouds compared to Mercury’s dark gray rocks and dust; and Venus is currently showing us more of its sunlit dayside.

“Don’t miss this chance to do a little astronomy from your backyard, balcony, or rooftop,” says Sky & Telescope associate editor Tony Flanders. “It’s a big universe, and planets await.”

Thanks to SkyandTelescope.com for the image.

You can contact Bob Eklund at: email [email protected], website www.bobeklund.com. Bob Appears here thanks to the Mountain View News.

‘This Planet Tastes Funny,’ According to Spitzer Telescope NASA’s Spitzer Space Telescope has discovered something odd about a distant planet—it lacks methane, an ingredient common to many of the planets in our solar system. “It’s …[READ MORE]