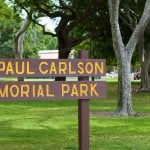 Culver City Crossroads celebrates the birthday of Dr. Paul Carlson, after whom we re-christened Victory Park. What’s the story?  Glad you asked…

Paul Carlson (March 31, 1928 – November 24, 1964) was a medical missionary of the Evangelical Covenant Church that served in Wasolo, a city in what is now the Democratic Republic of the Congo. He was killed in 1964 by rebel insurgents after being falsely accused of being an American spy.

Carlson was born in Culver City, California, the son of Swedish immigrant Gustav Carlson, a Southern California machinist, and his wife Ruth. He graduated from North Park University when he was a junior college in 1948, went on to earn a bachelor’s degree in anthropology from Stanford in 1951, and finished medical school at George Washington University in 1956. In 1963, he followed the call of the Covenant Church to serve God as a missionary doctor, along with his wife and small family, in the Ubangi region of the Congo in Africa.

Paul Carlson and family arrived in Congo and began working as medical missionaries in the town of Wasolo. Activities included working in the 80-bed hospital and leper colony. During this time, Dr. Carlson earned the nickname Monganga Paul, a name revealing a close and loving relationship with the local Congolese people. This work continued until the political unrest of the time reached them and the Carlson family crossed the Ubangi river to seek refuge in the Central African Republic. Dr. Carlson, however, remained committed to his hospital and work in Wasolo, and he returned.

This return placed him in the middle of the political unrest of the time, and he soon fell into the hands of the rebel army. Under the unstable leadership of Christopher Gbenye, the rebels accused Paul of being an American spy and took him as a hostage to Stanleyville, now Kisangani. Dr. Carlson was held here for over a year and was mentally and physically tortured. On November 24, 1964, during a rescue attempt by American and Belgian troops, Dr. Carlson was shot and killed by rebel gun fire. He was called the Congo Martyr and was on the front page of both Time and Life magazines.

Dr. Paul Carlson Park was originally Victory Park, on property dedicated by the  in 1927. The prior name, Victory Park, was long thought to be associated with the U.S.A.’s victory in World War I. There is evidence, however, that the wife of Mayor Reve Houck named it because “it was a victory to have a park in Culver City,” according to daughter, Alene Houck Johnson.

His wife, Lois Carlson, wrote a biography on him called Monganga Paul.