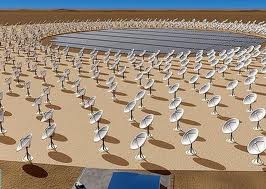 Getting Ready for the World’s Biggest-Ever Telescope –

Plans for the world’s biggest telescope—the Square Kilometer Array—advanced significantly this month with a decision to locate the project office at Jodrell Bank Observatory near Manchester, England; support from the partners including the United Kingdom for the next phase of the project; and the first steps towards creating the legal entity needed to deliver this ambitious global enterprise.

The Square Kilometer Array (SKA) is a €1.5 billion multinational science project to build the world’s largest and most sensitive radio telescope. The SKA will be capable of answering some of the most fundamental questions about the Universe—including understanding dark energy, general relativity in extreme conditions and how the Universe came to the look the way it does now.

The SKA will be an array of radio antennas with a collection area of a square kilometer with its core in South Africa or Australia. Signals from individual antennas will be combined to form one giant telescope.

In the same way, the famous Lovell Telescope at the University of Manchester’s Jodrell Bank Observatory is already being used with other U.K. telescopes (the e-MERLIN network) and as part of an international network. With an antenna at Chilbolton, the U.K. is also part of LOFAR a low-frequency network centered in the Netherlands. SKA will build on this technique and tradition of collaboration, bringing together all the major groups in radio astronomy.

Professor Dame Jocelyn Bell Burnell, prominent radio astronomer and President of the Institute of Physics, said: “Since the 1950s, radio astronomy has provided scientific pioneers with tools to revolutionize our understanding of the Universe. The power of this new telescope project, however, is going to surpass anything we’ve seen before, enabling us to see many more radio-emitting stars and galaxies and pulling the curtains wide-open on parts of the great beyond that radio astronomers like me have only ever dreamt of exploring. The Square Kilometer Array heralds in a post-Einstein era of physics that will help us take huge strides in our attempt to understand the most bizarre objects and the darkest ages of the Universe.”

The SKA has been designated as a top-priority project for astronomy both in the U.K. and across Europe. It is a very significant step that nine partners have started the process to secure funding and create a legal structure for this project. The U.K., through the Science and Technology Facilities Council, is expecting to invest in the order of £15 million in its next phase.

In addition to the immense scientific progress that will be made by the SKA, the project is expected to have wider benefits in continuing its already impressive involvement with industrial partners and continuing the inspiration of the public through astronomy, as Jodrell Bank has for many years.

The SKA project will drive technology development in antennas, signal transport, signal processing, and software and computing. Spinoff innovations in these areas will benefit other systems that process large volumes of data. The design, construction and operation of the SKA has the potential to impact skills development in science, engineering and in associated industries not only in the host countries but in all project partners.

Study Says Solar Systems Like Ours May Be Common- Nearly one in four stars like the Sun could have Earth-size planets, according to a University of California, Berkeley, study of nearby solar-mass stars. UC Berkeley …[READ MORE]

Wasted Lights and Wasted Nights: Globe at Night Tracks Light Pollution Poorly aimed and unshielded outdoor lights are more than an annoyance. They waste more than $2 billion (17 billion kilowatt-hours) of energy in the …[READ MORE]