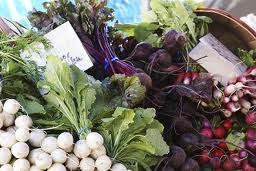 It’s National Poetry Month. Who am I to argue with a poet? So this week is radish week. You’ll find a “bunch” of radish recipes toward the end of this column. And no, none of them are for a radish knish, or even a radish-stuffed fish dish.

But first, an update on the post-rains harvest situation. Most of the farmers I spoke with last week were not badly affected by the recent spate of heavy rains. Right before the rains came back, Finley Farms had planted some onion seed. Those that hadn’t rooted were washed away. (Finley Farms is taking this week off from the market to do a little vacationing.) But the good news is that everyone’s strawberries seem to have come through unscathed, and the most frequent comment was that the fields were muddy.

The sun was out and the temperature was warm as I strolled up and down Main St. I was basking in the glory of blue sky, although memories of rain and cold were not far from my mind. As I walked from stall to stall, I suddenly became conscious of singing nearby me. “It rained all night the day I left; the weather it was dry.” Oh, Susanna, don’t you cry for me, I nearly chorused out in return. Those words reminded me of our changeable weather, so I turned my head to see its source: a tall, affable-looking man with a guitar and a ready smile: “Mr. David.” Mr. David’s full name is David Alexandrou (MrDavidMusicWorks.com on the web). We talked music for a bit. He’d been singing Stephen Foster’s “Oh Susanna,” a lovely piece of Americana I remember from my childhood. Mr. David has an extensive repertoire of children’s songs, but many of his original and cover versions include elements which will definitely appeal to the rock and roller within us all. Sadly, I forgot to ask him if he knew any songs about radishes.

Did any songwriter take up poet Kushkin’s challenge, I wonder.

In colder latitudes, baby red radishes are harbingers of spring. Their quick germination time means that they arrive at market sooner than most other spring vegetables. Here in Culver City, our climate is temperate enough that our market farmers are able to grow a fair amount of produce year round which would be seasonal in other places.

Yet, to every thing – even radishes – there is a season. The round red Cherry Bell radishes of spring are sweeter than their more pungent fall and winter relatives. As spring turns into summer, you’ll start seeing multicolored bunches of “Easter Egg” radishes, a mix of red, white, and purple-red hues. In the hot summer months, you’ll see elongated red and white French breakfast radishes, which tolerate the heat better than some other varieties. And as the days begin to get shorter and the nights begin to get colder, you’ll find the larger round red radishes with their firm texture and more pronounced bite. Late season radishes keep well, in contrast to their more perishable early season cousins.

A glance at some of the Asian stalls at the market is enough to dispel the notion that radishes are small red globes. Those long, plump, white roots with their greens still attached are radishes, too – daikon radishes. If you’ve eaten in Japanese restaurants you may have seen daikon without knowing it. Grated daikon is often served as an accompaniment to other dishes, or added as an ingredient for sauces. I’ve yet to see a black radish at the Culver City farmers market, but I’ve seen them a couple of times in cooler months at the Wednesday Santa Monica market. As you’d expect, black radishes are as far apart from their white cousins in taste as they are in color. Black radishes are strong, even when peeled. Slicing and salting them will help moderate their taste, as it does for any radish.
I’d never eaten a radish dipped in room-temperature unsalted butter until yesterday. Delish! No wonder famed chef James Beard enjoyed them so much on open-faced white bread sandwiches.

I had eaten cooked radishes, though, well before they started showing up in food blogs and foodie chats and listserves. One Thanksgiving some years back, my friend Duffy made a marvelous vegetarian stew. There was no Tofuti, but there were some wonderful small round sweet vegetables. Definitely not baby turnips, but what were they? Radishes, Duffy answered. Radishes? Who knew that cooking them could make them sweeter and less pungent? Roast them as you would carrots, or braise them as you would fennel. With baby radishes, you can even keep the greens on while you braise them.

And who knew that radish greens could be eaten? Tiny, tender leaves can be added to salads, while more mature leaves can be cooked like spinach or other greens.

Try one – or more – of these cooked radish recipes. Cook up your radish greens, or include them in your salads or soups, as soon as you get them home. The greens are highly perishable, and the radishes will keep better with their tops removed. If you are weary of dishing up a dish of radish greens, mix them in with other greens (spinach, mustard, kale, etc.). Try them out in this recipe, adopted from The New York Times Natural Foods Cookbook.

Heat oil in a heavy skillet. Add garlic and stir until it starts to soften. Add the greens and cook them, stirring quickly as you would a stir-fry, until they wilt down. Reduce heat, cover, and simmer for five minutes. Using a slotted spoon, remove greens to a platter. Add the sour cream or yogurt to the skillet, and stir until it absorbs the remaining liquid and becomes warm. Add salt and pepper to taste. Pour over greens and serve.

The slightly tangy taste of cooked radishes is well-complimented with a touch of sweetness, whether from cooking with a sweeter vegetable or from a pinch of sugar.

Sugar-glazed Radishes
1 bunch radishes, trimmed, halved or quartered, or half a daikon, peeled and cubed
2 T. butter
1 t. sugar
1/2 tsp. Salt
2 T. minced parsley or cilantro.
You’ll want a heavy saucepan or skillet wide enough to hold all the radishes in a single layer. Place it over medium-low heat, add butter. When butter melts, add sugar and salt, stir, and then add the radishes. Cook, stirring, for a minute. Then add 1/2 c. water, cover, and simmer for 10-15 minutes until tender. Remove cover and boil, uncovered, until the liquid reduces to glaze. Swirl radishes in pan until they are coated with the glaze. Serve, garnished with parsley or cilantro if desired.

Ginormous. Absolutely ginormous. Ginormously ginormous. That’s all I could think as I gazed lovingly and hungrily at the displays of jumbo fresh-picked Globe artichokes at the Tuesday Culver City Farmer’s Market. At $4 a head, …[READ MORE]

Who has not stayed up late on New Year’s Eve to count down to midnight and the ringing in of the new year? Whether you choose party in style or cocoon at home with the …[READ MORE]

You have no idea how thankful I am to see blue sky outside my window this morning. On Sunday I was beginning to think that there was a cosmic misunderstanding about the concept of “spring.” …[READ MORE]