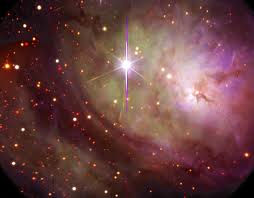 Breaking Waves in the Stellar Lagoon

THE NASA/ESA HUBBLE SPACE TELESCOPE, launched into orbit two decades ago in 1990, continues to delight our sense of beauty as well as challenging our intellect. A case in point is a spectacular new Hubble image that reveals the heart of the Lagoon Nebula (Messier 8), located 4000–5000 light-years away in the constellation of Sagittarius, the Archer.

The placid name of this deep-sky object—seen in the telescope as a massive cloud of glowing dust and gas that is being bombarded by the energetic radiation of new stars—hides a dramatic reality. The space telescope’s Advanced Camera for Surveys has captured a stunning view of gas and dust sculpted by intense ultraviolet radiation from hot young stars in the Lagoon Nebula’s heart.

This object is named for the wide, lagoon-shaped dust lane that crosses the glowing gas of the nebula. That dust-lane structure is prominent in wide-field images, but cannot be seen in the Hubble telescope’s close-up. However, the strange billowing shapes and sandy texture visible in this image make the Lagoon Nebula’s watery name eerily appropriate from this viewpoint too.

This nebula is actually a huge region of star birth that stretches across one hundred light-years. The image shows clouds of hydrogen gas slowly collapsing to form new stars, whose bright ultraviolet rays then light up the surrounding gas in a distinctive shade of red.

The wispy tendrils and beach-like features of the nebula are not caused by the ebb and flow of tides, but rather by ultraviolet radiation’s ability to erode and disperse the gas and dust into the distinctive shapes that we see.

In recent years, astronomers probing the secrets of the Lagoon Nebula have found the first unambiguous proof that star formation by the accretion (growth or enlargement by gradual buildup) of matter from the gas cloud is ongoing in this region.

Young stars that are still surrounded by an “accretion disc” of in-falling gas and dust occasionally shoot out long tendrils of matter from their poles. Several examples of these jets, known as “Herbig-Haro objects,” have been found in this nebula in the last five years, providing strong support for astronomers’ theories about the formation of new stars in such hydrogen-rich regions.

The Lagoon Nebula is faintly visible to the naked eye from a dark-sky location on summer nights as a small patch of gray in the heart of the southern Milky Way. Even in a moderate-sized telescope, the nebula looks underwhelming, partly because human eyes are unable to distinguish clearly between colors at low light levels.

The 18th century French astronomer Charles Messier (1730–1876) observed this nebula and included it in his famous astronomical catalouge of 103 “Messier Objects” (deep-sky objects other than stars, such as nebulae and star clusters), from which the nebula’s alternative name comes. But Messier’s relatively small refracting telescope would only have hinted at the dramatic structures and colors now visible—thanks to our venerable Hubble Space Telescope.

Sark Becomes World’s First Dark Sky Island (A Good Place for Looking Up…) The Channel Island of Sark has been recognized for the quality of its night sky by the International Dark-sky Association (IDA), which …[READ MORE]

Triton’s Summer Sky of Methane and Carbon Monoxide According to the first-ever infrared analysis of the atmosphere of Neptune’s moon Triton, summer is in full swing in its southern hemisphere. Using the Very Large Telescope …[READ MORE]