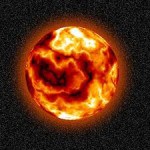 A camera aboard NASA’s Mars Odyssey spacecraft has helped develop the most accurate global Martian map ever. Researchers and the public can access the map via several websites and explore and survey the entire surface of the Red Planet.

The map was constructed using nearly 21,000 images from the Thermal Emission Imaging System, or THEMIS, a multi-band infrared camera on Odyssey. Researchers at Arizona State University’s Mars Space Flight Facility in Tempe, in collaboration with JPL, have been compiling the map since these observations began eight years ago.

The pictures have been smoothed, matched, blended and cartographically controlled to make a giant mosaic. Users can pan around images and zoom into them. At full zoom, the smallest surface details are 330 feet wide. While portions of Mars have been mapped at higher resolution, this map provides the most accurate view so far of the entire planet.

The new map is available to everyone at: http://www.mars.asu.edu/maps/?layer=thm_dayir_100m_v11

Advanced users with large-bandwidth, powerful computers and software capable of handling images in the gigabyte range can download the full-resolution map in sections at: http://www.mars.asu.edu/data/thm_dir_100m

“We’ve tied the images to the cartographic control grid provided by the U.S. Geological Survey, which also modeled the THEMIS camera’s optics,” said Philip Christensen, director of the Mars Space Flight Facility. “This approach lets us remove all instrument distortion, so features on the ground are correctly located to within a few pixels and provide the best global map of Mars to date.”

Working with images from the new map, the public can contribute to Mars exploration by aligning the images to within a pixel’s accuracy at NASA’s “Be a Martian” website, which was developed in cooperation with Microsoft Corp. Users can visit that site at: http://beamartian.jpl.nasa.gov/maproom#/MapMars

“The Mars Odyssey THEMIS team has assembled a spectacular product that will be the base map for Mars researchers for many years to come,” said Jeffrey Plaut, Odyssey project scientist at JPL. “The map lays the framework for global studies of properties such as the mineral composition and physical nature of the surface materials.”

Other websites build upon the base map. At Mars Image Explorer, which includes images from every Mars orbital mission since the mid-1970s, users can search for images using a map of Mars at: http://themis.asu.edu/maps

“The broad purpose underlying all these sites is to make Mars exploration easy and engaging for everyone,” Christensen said. “We are trying to create a user-friendly interface between the public and NASA’s Planetary Data System, which does a terrific job of collecting, validating and archiving data.”

MEANWHILE, CLOSER TO HOME, it’s time once again for nature to put on its late-summer fireworks show: the Perseid meteor shower. The best viewing of this annual meteor display is typically before dawn on August 12. At its peak, the shower could produce up to 100 meteors per hour.

The name “Perseid meteors” derives from the fact that they appear to fall from the constellation Perseus, but they are not associated with it. The meteors are actually leftover debris from comet Swift-Tuttle. The Perseid meteors recur each year when Earth passes through that comet’s debris trail.

For your best view, get away from city lights. Look for state or city parks or other safe, dark sites. Lie on a blanket or reclining chair to get a full-sky view.

Setting Sail for the Stars – The spring winds gusting across the Southland today almost had me grumbling about wind chill and such—but instead, the wind-pressure at my back suddenly brought a flood of pleasant …[READ MORE]

School Pupils to Partner with Research Scientists – The Van Allen radiation belts are a hazardous environment, full of “killer” electrons that can be lethal to orbiting satellites. And when those electrons sometimes hit the …[READ MORE]