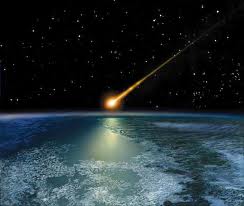 Scientists have performed a microprobe analysis of the core and outer layers of a pea-size piece of a meteorite some 4.57 billion years old to reconstruct the history of its formation, providing the first evidence that dust particles like this one experienced wildly varying environments during the planet-forming years of our solar system.

The researchers interpret these findings as evidence that dust grains traveled over large distances as the swirling proto-planetary nebula condensed into planets. The single dust grain they studied appears to have formed in the hot environment of the Sun, then may have been thrown out of the plane of the solar system to fall back into the asteroid belt and eventually to be recirculated back to the Sun.

This odyssey is consistent with some theories about how dust grains formed in the early proto-planetary nebula, or proplyd, eventually seeding the formation of planets.

“This has implications for how our solar system and possibly other solar systems formed and how they evolved,” said Justin I. Simon, a former University of California, Berkeley, post-doctoral fellow who led the research, published in the March 4 issue of the journal Science. “There are a number of astrophysical models that attempt to explain the dynamics of planet formation in a proto-planetary disk, but they all have to explain the signature we find in this meteorite.”

Meteorites have puzzled scientists for more than 100 years because they contain minerals that could only form in cold environments, as well as minerals that have been altered by hot environments. Carbonaceous chondrites, in particular, contain millimeter-sized chondrules and up to centimeter-sized CAIs (calcium-aluminum-rich inclusions) that were once heated to the melting point and later welded together with cold space dust.

“These primitive meteorites are like time capsules, containing the most primitive materials in our solar system,” Simon said. “CAIs are some of the most interesting meteorite components. They recorded the history of the solar system before any of the planets formed, and were the first solids to condense out of the gaseous nebula surrounding our proto-sun.”

Perhaps the most popular theory explaining the composition of chrondrules and CAIs is the so-called X-wind theory propounded by former UC Berkeley astronomer Frank Shu. Shu depicted the early proto-planetary disk as a washing machine, with the Sun’s powerful magnetic fields churning the gas and dust and tossing dust grains formed near the Sun out of the disk.

Once expelled from the disk, the grains were pushed outward to fall like rain into the outer solar system. These grains, both flash-heated chondrules and slowly heated CAIs, were eventually incorporated along with unheated dust into asteroids and planets.

“If you were this grain, you formed near the proto-sun, then likely moved outward to a planet-forming environment, and then back toward the inner solar system or perhaps out of the plane of the disk,” Simon said. “Of course, you ended up as part of a meteorite, presumably in the asteroid belt, before you broke up and hit the Earth.”

In terms of today’s planets, the grain probably formed within the orbit of Mercury, moved outward through the region of planet formation to the asteroid belt between Mars and Jupiter, and then traveled back toward the Sun again.