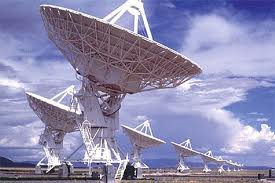 Somewhere, over the rainbow…

This week astronomers from twelve countries will mark the fiftieth anniversary of the search for extraterrestrial intelligence (SETI) by beginning a coordinated series of observations of several nearby stars—including two stars that were the target of the first search.

To demonstrate the advances in SETI over the past half century, on November 5, astronomers in Australia, Japan, and Korea began coordinated observations for radio and laser signals from civilizations circling these stars, followed over the next day by SETI searches in Italy, the Netherlands, France, Argentina, and the United States. More international observations will take place later this month.

The first SETI experiment, Project Ozma, was conducted in April 1960 by astronomer Frank Drake, now at the SETI Institute in Mountain View, California. Project Ozma—named after the book “The Wonderful Wizard of Oz”—listened for radio signals from extraterrestrial civilizations and started a new field of science. To commemorate this first search and the advances in SETI science and technology over the past half century, astronomer Shin-ya Narusawa of Nishi-Harima Astronomical Observatory in Japan launched Project Dorothy, named after the heroine of the same story.

“It is thrilling for me to witness the beginnings of Project Dorothy, the continuation of my search of fifty years ago,” said Drake. “To have so many talented people using so many telescopes in this new search, with the electronics and computer equipment of today, is a joyful thing to me. The equipment of today is far better than what we could have fifty years ago, and will result in both very much better and very much more data than could be obtained then.”

“Two of the original stars from Project Ozma—Tau Ceti and Epsilon Eridani—are the nearest solar-type stars visible in the northern hemisphere,” explained Narusawa. “Therefore, these two stars were the best SETI targets a half century ago. They remain the symbol of project Ozma and are two of the target stars for Project Dorothy,” he added. “But astronomy has improved over the last five decades, and about five hundred planets have been discovered around other stars. Some of these stellar systems have planets located the right distance from their stars to support life. We also included such stars among the targets of Project Dorothy.”

“Project Dorothy vividly demonstrates just how far SETI has come in the past fifty years,” said the SETI Institute’s Douglas Vakoch, who is a member of Project Dorothy’s Working Group. “Astronomers can now do SETI research at observatories from South Africa to the Netherlands, from Argentina to India, from Japan to Italy, as well as from the longstanding American projects at the SETI Institute, the University of California at Berkeley, and Harvard University. The lessons learned through Project Dorothy provide critical preparation for the day we finally detect a signal from another civilization,” Vakoch explained.

Because of the daily rotation of the Earth, many stars are visible for only a portion of the day from a single observatory. “By learning how to coordinate international SETI observations now, we’ll be better prepared to track a signal continuously, around the world, after first contact,” he said.

“Over the past fifty years our searches have not yet produced the discovery we all hope for,” said Drake. “This is understandable—in our vast and awesome universe it will take long, painstaking, and comprehensive searches before we will have a good chance of success. This is the major lesson learned from previous searches. Project Dorothy is a major step in meeting the challenge created by this lesson.”