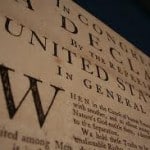 When in the course of human events, it becomes necessary for two people to dissolve the legal and social bonds which have connected them with one another, it’s called divorce. This is a declaration of independence.

Not only does the opening of the Declaration of Independence use very similar language, these words also grace the Declaration of Sentiments from Seneca Falls, the beginning of American feminism. I count Thomas Jefferson and Elizabeth Cady Stanton among the deities in my personal pantheon, and I hope they smile down upon me in this moment that I indulge in a round of homage. I don’t know that I ever imagined the course of human events taking me here, but here I am.

As Jefferson continued, “…to assume among the powers of the earth, the separate and equal station to which the Laws of Nature and of Nature’s God entitle them, a decent respect to the opinions of mankind requires that they should declare the causes which impel them to the separation.”

April 2009 was the third time I had asked for a divorce, so the idea that this marriage did not work was nothing new. The fact that this has taken more than a year and a half gives you some idea of how challenging it has been. The only thing harder than getting divorced would have been staying married. Trying to negotiate an ending with someone who is already difficult to communicate with is like trying to pick up a radio signal from another country, and answer in a language you don’t speak.

In declaring my independence I am not placing blame. I’m satisfied to accept responsibility. Some things just don’t work, despite the best intentions and efforts of everyone involved.

I have so many friends who have been divorced I’ve been sustained through the whole process with support, advice and empathy, not to mention food, wine and laughter. I have many friends who really are happily married, some of them for decades. I even have friends who have great marriages where they work together on common causes, using their partnership not just to support each other, but to make the world a better place. I’m in a thrilling anthropological research project to discover how this happens.

I know this can happen. I can’t hold Thomas Jefferson up as a shining light here, but Elizabeth Cady and Henry Stanton do give off a nice glow; the abolition of slavery and women’s sufferage are now part of our history as Americans. When Elizabeth and Henry made their vows, both were distant dreams. They also spent their lives raising children, running a household, and dealing with the problems that all couples deal with, but they married with a greater mission in mind.

We are each given a certain number of days to live our lives. When time is spent every day bickering over petty problems, life is wasted, and the people who could be changing the world are left wondering if it’s even worth the effort to change a light bulb.

I have spent the last 17 months being tested, every hour of every day, on my ethics, my philosophy and my commitment. I could have settled for any of the pressure valves that people use to let off the steam of a bad marriage; cheating, self-pity, slander or hysterics. I don’t judge those who do. Divorce is a hell of a hard place to be. But that’s not the example I want to set, and that’s not the life I live. There have been plenty of occasions when I have been tempted towards all of these, but I have been true to myself, and honest with those around me. I have to live with myself, and I would not be able to face myself in the mirror if I had failed at my own philosophy.

The final court date had me thinking about this essay, considering if I should post it. When I handed the final settlement agreement to the sheriff, a tall woman of color with an easy smile, I looked at her name tag and read that she was a Jefferson. She looked quite a bit more like Sally than Thomas, but I could see that she was family. As we say in the writing business, you can’t make up things like this. It’s too perfect to be fiction.

I did not find anyone named Stanton in the courtroom, but the lawyer who was volunteering her pro bono time to help us finalize our negotiations was also on the phone helping a woman who needed to get a restraining order. She may not have had the name, but she was absolutely one of those Stanton-types, putting in her hours to make the world a better place.

Then there was the” Freedom Shrine” in the hallway of the courthouse donated by the Exchange Clubs of America, framed copies of the Magna Carta, the Gettysburg Address, and yes, the Declaration of Independence. I had to walk past it nine times in one afternoon. I had to notice it was there. If this were fiction, it could be easily critiqued for leaning too heavily on message. But it’s only the truth.

I’m very lucky to live in a place where ending my marriage does not make me either a loser or a villain. It just makes me honest. And single. This is a declaration of independence.

As Elizabeth said to Henry, right, now back to work.

Mary Daly died at just the right time on January 3 last week. I have been heartbroken and weary with all the funerals I have attended lately, but when I heard that one of my …[READ MORE]

While the national news is still filled with the repercussions of a blue state electing a red senator, I’m completely irritated with the color-coding system.  It is certainly easier than thinking, but I’m just fed …[READ MORE]