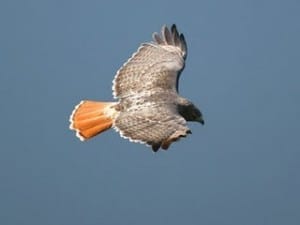 We have had, for the past month, a red tailed hawk nesting in a ficus tree at El Marino Elementary School. It’s kind of an extraordinary situation. We have an endangered species making a nest above the kindergarten playground.

When I first saw Corolla Fleeger, the Culver City Animal Services officer, in front of the school talking into her cell phone, I waited to ask why she was at the school. When she told me about the hawk, I was very intrigued. It wasn’t simply a matter for Animal Control, but the Department of Fish and Game, and several other agencies on up the line. While there was some talk about trying to move the nest, it involved so much red tape and permission from so many governmental agencies, the idea has faded away.

What we have is a nesting hawk, a mother protecting her eggs (or hatchlings), and happily, a community that has decided to let Mother Nature take her time.

According to a source at the Department of Fish and Game, breeding occurs around the end of March to the beginning of May, depending on the area the birds live in. Up to five eggs are laid. The eggs hatch at 1 to 2 day intervals. The young are covered in white down, and start to grow feathers around two weeks after hatching. They are fully fledged around 45 days from hatching. The parents will look after the young for up to 4 weeks after fledging and the young may stay in close proximity to the parents until autumn.

I thought of all the parents I know getting ready for fifth grade graduation this year, not just at El Marino, but at other schools as well. The middle-schoolers stepping up to the next stage. The parents at the high school, preparing to send their kids out into the world. It’s one of the things we are in this world to do; prepare the next generation to take their place. Go and fly.

When I spoke to another friend of mine who has long studied Native American lore, she was delighted about the nest, and enthused about the mythical meaning of the hawk.

Red-tailed hawks are good luck, but not just good luck. More like really great luck. What the double rainbow is to Asian cultures, the red-tailed hawk is to the Apache. This is a sign from the universe that some amazing, special, wonderful things will be happening here. Birds are often seen as messengers in myth and in poetry. I admit, the scientifically minded part of me spent almost a week trying to figure out how we could get a webcam into the tree and watch this whole amazing process on a monitor in the classrooms, but the poetically inclined part of me was just happy to look at the dense green foliage and hear the children in the hallways whisper and point towards the tree. “We have a hawk,” I heard on first-grader telling another “and she came here to have her babies this spring. We are special.”

Our school system is facing big changes and tough times. Our children, both the graduating seniors and the incoming kindergarten classes, are facing changes both epic and daunting. They will benefit from using both their poetic instincts and their scientific inclinations, and we will be glad that we filled their days with music and theater and language and math.

When the school is empty this summer, the nest will be too. What comes after this is unknown. But in this moment, we have a red-tailed hawk, and that means we are special.

It’s always seemed like a great idea, but to me it has that holiday echo, like being nice to everyone because it’s Christmas. Why not just be nice all the time? If it’s a good …[READ MORE]

Just A Thought- Up the Spiral

Public speaking is known to be one of the things we fear instinctively, like loud noises. While I have the curious habit of reaching for the things I fear most, I feel that it’s only …[READ MORE]

Just a Thought – For Hope, Health and Healing