Kentwood Players proudly welcomed Mamie Hansberry, the sister of “A Raisin in the Sun” playwright Lorraine Hansberry, to their production of the classic family drama on Sunday, January 10, 2016. Ms. Hansberry attended the play with several family members and shared how proud her entire family is of “everyone who has ever been a part of it.” She has seen hundreds of productions in the past six decades and remarked that each member of the Kentwood Players cast “brought their own unique understanding and insights into her sister’s remarkable characters.”

After the matinee performance, Mamie Hansberry joined the cast onstage and shared unpublished pages of her memoirs in which she admitted to naming her younger sister Lorraine after a childhood friend, and how “Lorraine loved to spend time in the library, a place she called her ‘dreamland’ where she could lose herself in the magic of words and wished-for reality.” She also spoke about how thrilling and exciting the Chicago opening of “A Raisin in the Sun” was for her whole family, especially her sister who was dedicated to her craft. The play was backed financially by Harry Belafonte and Sidney Poitier, who starred as Walter Lee Younger in the 1959 Broadway production. Major backing also was provided by Howard University, Ms. Hansberry’s alma mater.

With Black History Month approaching, Ms. Hansberry said that her parents never talked about slavery with their children. “It was just something no one talked about back then,” remarked the spry 92-year-old. And now after 300 years, we have a black President and a whole month dedicated to learning about our history,” she beamed to the audience. “But it’s been a long and bitter road to get there, and I thank the NAACP who held the door open and was not afraid to take a stand on equal rights before anyone else.”

The Hansberry family owned a Chicago-based real estate company and 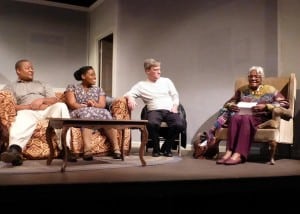 often heard stories about how black property owners could not acquire loans from bankers to make necessary improvements on their homes, and were often run out of town in the middle of the night, having to speed away in large cars in which they had to live as there were few restaurants and no hotels where black people could stay. “We heard of a black doctor who kept a chauffeur’s hat on the front seat of his large sedan and wore it whenever he was pulled over by a law enforcement officer. When he identified himself as the doctor’s chauffeur, he was always released to go on his way. But others were not as lucky and were badly beaten when caught on the road late at night.” Perhaps this story was the impetus for Walter Lee Younger, the protagonist in “A Raisin in the Sun” who longs for a better life than just being a chauffeur, driving someone else around all day.

“There was also a man from Kenya who attended a party in my home in the early 1940’s who expressed the need to know and love each other and learn about our heritage. No doubt he was the inspiration for Joseph Asagai in my sister’s play who encourages Beneatha Younger to return to Nigeria with him to learn about her people and pursue her dreams.”

Ms. Hansberry is also an accomplished artist whose work may be seen at The Mayme A. Clayton Library & Museum (MCLM), located at 4130 Overland Avenue, Culver City, CA 90230-3734, where annual thought-provoking exhibitions in its four exhibit galleries complement and highlight their exhibits aimed at providing a more comprehensive understanding of African and African American contributions to American history and culture. MCLM presents a variety of public programming including performances, readings, film screenings, concerts, lectures, book signings, special events, and workshops, and offers scholars of all ages a place to conduct research on African-American art, history, and culture utilizing non-circulating library collections with access to papers, letters, rare books, periodicals, photographs, music, art, and much more. “It’s such a perfect place to celebrate our culture during Black History Month especially,” she shared with a touch of ironic humor in her voice, “as it is the former Culver City Jail.” For further information, please call (310) 202-1647 or contact Lloyd Clayton at [email protected]

Experience Lorraine Hansberry’s groundbreaking play “A Raisin in the Sun” presented by Kentwood Players at the Westchester Playhouse, 8301 Hindry Ave in Westchester, CA 90045, on Friday and Saturday at 8pm, Sunday at 2pm through February 13, 2016. The production directed by Harold Dershimer and produced by Kathy Dershimer by special arrangement with Samuel French. Featured in the cast in alphabetical order are Rashod Davenport, Ruth Featherstone, Daniel Kruger, Kowalsky Lucien, Jean Michels, Patricia Newman, Shannon O’Connor, Damon Rutledge, Isaiah Suber, and Charlotte Williams. This seminal American drama centers on sacrifice, trust and love among the three generations of the Younger family and their heroic struggle to retain dignity in a harsh and changing world. The play is a searing and timeless document of hope and inspiration to all.

Tickets are $20 with a $2 discount for seniors, students, servicemen, and Metro riders who present their monthly pass or TAP card when purchasing full price tickets at the box office. To purchase tickets by phone, please call (310) 645-5156 during box office hours, Wednesday through Saturday from 4pm-7pm. You may also purchase tickets online at www.kentwoodplayers.org.

For more information about Kentwood Players including upcoming auditions and future productions including “Clybourne Park” (the sequel and companion play to “A Raisin in the Sun”), please visit the Kentwood Players website at www.kentwoodplayers.org.

Photo above – Mamie Hansberry, sister of  playwright Lorraine Hansberry, shares memories of the  play’s creation with the Kentwood Players cast after a performance at the Westchester Playhouse. Photo credit Shari Barrett.