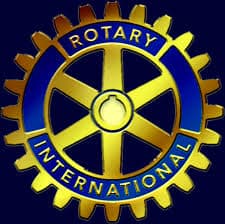 On June 28, 2015 Culver City Rotarians celebrated the end of one year and the start of a new one. Called a “Demotion Party,” a tongue in cheek reference to the demotion of one year’s officers, including president Joel Forman, and inducting new officers.

As Forman relinquished his reign to the new president Carmela Raack, he handed out many awards to Rotary members who contributed their time and money to numerous community causes during the year: For excellence in communication with the club newsletter, local Realtor, Daniel Cavanaugh of Cavanaugh Realty; for organizing the first Rotary Healthy Family Race, Culver City’s YMCA’s Youth Director, Lamondo Greer; for excellence in public relations, Wendy Taylor of Taylor & Scott, a local writer and publicist; and the BIG award as Rotarian of the Year, Adriana Beischl of At Home Nursing Care in Culver City

Six Rotarians received Paul Harris Fellows, a distinctive honor “in appreciation of tangible and significant assistance given for the furtherance of better understanding and friendly relations among peoples of the world.”

When $1,000 is donated in a person’s name they become a Paul Harris Fellow. This recognition is named after the founder of Rotary, Paul Harris. The Culver City Rotary Club is a 100% Paul Harris Fellow Club. Donations by club members provided recognition to members Darrel Menthe, Culver City attorney at Miller, Miller & Menthe, Craig Singer (retired teacher), Lucio Chaidez of a Culver City Wells Fargo branch, and Adriana Beschl, Lamondo Greer, and Wendy Taylor (all mentioned above).

The Rotary Foundation, a not-for-profit corporation, is funded solely by voluntary contributions from members and friends of Rotary International who support its mission to advance world understanding, goodwill, and peace. Using Rotary Foundation grants, Rotary’s 34,000 clubs across the globe develop and carry out sustainable humanitarian projects and provide scholarships and professional training opportunities that promote peace, fight disease, provide clean water, sustain mothers and children, improve education, and strengthen local economies. The Foundation is a worldwide leader in the efforts to eradicate polio

With Culver City Rotary’s new president Carmela Raack at the helm, the club is organizing activities for the 2015-16 year. Supporting the Culver City Police Department with National Night Out, Tuesday, August 4, will be the first major event of the year.