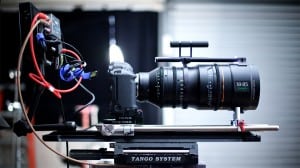 Everdream founders James Khabushani and R.J. Collins were recent college grads when in 2014 they gained the notice of Tesla founder and CEO Elon Musk for their self-produced advertisement of the electric vehicle. Now, they’re looking to help other young aspiring filmmakers.

Through their Culver City-based digital studio, they are launching a filmmaker-in-residence program to help recent college grads hone their craft. Everdream already works with more than a dozen in-house directors and producers, but is looking to formalize the program by working closely with local film schools at USC, Chapman University and NYU to recruit new filmmakers.

“Our model is all about forming relationships — across the music video, web series, film and TV spaces — to create a home for the most talented young filmmakers coming out of film school,” says Collins, himself a Chapman grad. “We want them to have a place where they can come, cut their teeth and build relationships.”

Khabushani and Collins co-founded Everdream with Joe Sill and Mishka Kornai in 2012 and eventually joined forces with Troy Carter’s Atom Factory as a portfolio company. Carter recently named Everdream, which has produced music videos for Atomy Factory clients such as John Legend, as its studio of record for future music videos. The company also works on branded content campaigns for advertisers that have included Best Buy and EA Games.

Everdream is structured as a think tank, with its directors split into teams alongside writers and producers. When the company works with a brand, each team develops ideas to pitch to the client. Everdream also works with its filmmakers to help them develop original ideas and encourages them to create web series and scripts for television and film. To that end, the studio is also in the process of setting up a management division that will help represent filmmakers as they move on to new projects.

“Over the last year we’ve had a few directors who have risen through the ranks,” explains Khabushani. “Our goal has been to foster their growth. Now that they’re capable and ready to move into long form content, we’ll be managing them through that process as well.”

Everdream is looking to work with filmmakers who can bring ideas into their think tank setting, have a natural storytelling ability and can execute on the studio’s budget-friendly projects. The company will initially engage filmmakers on a freelance basis before bringing them into the studio full time.

“Our goal with Everdream has always been to create the same opportunities that we were able to create for ourselves,” says Collins. “We want to not only be a home for filmmakers, but a home for young digital filmmakers.”