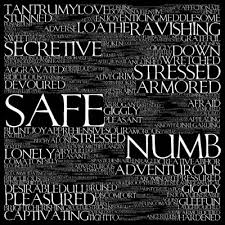 To Actually Feel Your Feelings?

I know you won’t believe this. But it turns out I don’t feel my feelings.

I know. You’re shocked? Me too.

Well I feel some feelings. I feel the “safe” ones. But usually only for a limited time.

I’ve realized that I’ve “survived” my feelings but saying out loud I feel “frustrated” but then putting that frustration away, not truly feeling the feeling. I only state my feelings and unconsciously store them away. Isn’t stating them aloud good enough? Apparently not.

Most of us have a limited supply of “safe” feelings. My “therapist parents” used to say that all feelings come down to four states: Mad, Glad, Sad or Scared. While that concept has merit in certain situations, I didn’t understand that I became limited with other feelings. If I felt anything, I would think about the four states and realize that when I said “irritated,” I was mad. When I said “cautious,” I was scared. By the way, I was rarely scared. I was always mad.

I was also called “hysterical” by my parents because my feelings were so big and explosive. Meanwhile the world I was exposed to: Therapist parents of the 70’s in Los Angeles (a diagnosis somewhere, I’m sure), was explosive to the ninth degree. My reaction as a child to situations weren’t deemed appropriate.

So I learned to scream and fight my way through everything. I thought anger was a virtue and a strength, and I chose anger much of the time. It was one of the few choices I seemed to have. I never expressed “frustrated,” or god forbid-”disappointed,” I was only mad. Then I screamed. And I screamed a lot.

When I was sad, I wasn’t sad, I was decimated, I cried for days. A movie could have me crying for hours afterwards. Literally hours. I took things too hard. There was no middle ground.

As an adult in my own family’s therapy, I was advised to learn to “contain” my feelings. I was told that my over explosive feelings were too difficult for my children to manage navigating, and I needed to have strategies to contain my feelings. Yes I could express frustration, but I had to be able to express it in a calm, collected way. Showing frustration needed to be completely modified so my children could hear my frustration, but weren’t overwhelmed by it.

So I’ve gotten really good at expressing, “I’m really frustrated.” But then I sort of put it away without feeling those feelings. After all, I’ve named the feeling, expressed it verbally, isn’t that good enough?

So in my current therapy, I’ve realized that now I can re-tell a difficult situation, and then I say, “But that’s okay…” brushing it off because I’ve put the difficult situation into a box. I’ve named the feelings, told the details with accuracy, but because there isn’t anything to do about the situation, I’ve just put it in a box, tied it up with a bow and left it in a corner of my soul somewhere. No feeling my feelings for me!

Lack of feeling might be also related to my health status. My life and my reactions to my life have an impact on my health. And I feel stuck. Or should I say, I’m expressing to you that I feel stuck, but I can’t truly take that in right now and “feel” it.

Many people I work with have the same difficulty. We just haven’t learned to name and feel a wide variety of feelings. The Center for Non-Violent Communication has a list at:
http://www.cnvc.org/Training/feelings-inventory and if you look at the list, you might see that the feelings of “forlorn,” “fragile,” “serene” or “renewed” are different from other feelings you have previously felt. We just don’t have a wide vocabulary when it comes to naming our feelings. It limits our expression of human-being-ness.

Ask yourself, “what does serene feel like?” When did I, if ever, feel serene? Take a moment and try and connect with “serene.” Do you get an outdoor image like I do? Do you think of someone who embodies serenity? Is there a symbol to you of serene? Close your eyes and try and feel serene. Do you find you feel other feelings in tandem with serene? Bliss, relaxed, content? What do those feelings feel like? Try to really feel them all.