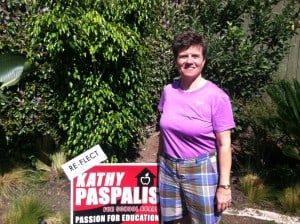 At a very well-attended event on Saturday, July 13, School Board President Kathy Paspalis declared her run for re-election to the CCUSD panel, and offered her supporters her zeal for the students, the schools and the community.   (see video here IMG_0331)
Fundraising was off to a brisk start as well, with Culver City councilman Jim Clarke reminding the crowd how ‘Emily’s List’ got it’s start. “It’s a great truth about political fundraising, ” Clarke noted, ” early money is like yeast — it helps the dough to rise.” Clarke thanks those in the crowd who had already made their contributions, and asked for volunteers to step forward for Paspalis as well.

With more candidates coming forward, Kathy hopes to be well served by her early opening in the race for re-election.