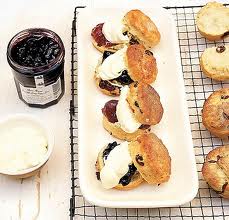 This week is one for the history books.

It started out with the Fourth of July on Monday, and will wrap up with a royal visit to Sony on July 10 from the Duke and Duchess of Cambridge (perhaps better known to all those watching their April wedding as Will and Kate).
The royals are visiting California during the peak of our strawberry season. I’ve seen Camarosa joining the Chandler, Seascape, and Albion strawberries. Luckily for shoppers at the Culver City Farmers Markets, we can sample before buying. They’re great in smoothies, on breakfast cereal, sprinkled with a glistening of sugar and a dollop of cream, and enjoyed straight from the basket. A spot of afternoon tea, UK style, wouldn’t be complete without strawberries and clotted cream on scones. Keep reading to find Her Royal Highness Elizabeth II’s own recipe for drop scones.

The royal scone recipe was one of the recipes featured in our National Archives’ current exhibit, “What’s Cooking, Uncle Sam?” Believe it or not, the recipe is an official federal document because Queen Elizabeth sent the recipe to President Dwight Eisenhower after he enjoyed her scones during a 1959 visit to Balmoral Castle. He National Archives exhibit continues until January 3, 2012. Visitors to the Archives in Washington, D.C. can see it and around 100 other presidential recipes on display, and enjoy special events such as book signings and film screenings. This summer’s movies include Willie Wonka and the Chocolate Factory (the 1971 Gene Wilder version), and Cloudy with a Chance of Meatballs. In August, food writer and author Clara Silverstein will discuss the first year of the Obama’s White House Garden and sign copies of The White House Garden Cook Book: Healthy Ideas from the First Family To Yours.

First Lady Michelle Obama raves about the healthy creamy-style spinach created by White House chef Cristeta Comerford. There’s plenty of spinach and carrots and other healthy vegetables in the White House Garden. Shoppers at the Tuesday and Saturday Culver City Farmers Market can find fresh locally-grown spinach, and the Tuesday market usually has olive oil, shallots and cloves for sale, too. (Note to self: spend less time at the food-to-go and artisan booths at the Culver South Farmers Market and check out the availability of shallots and garlic cloves. I most often buy perfectly ripe and ready to eat fruit and leafy vegetables at the Saturday market before heading off to the wonderful lunch, desert and artisan booths.)

To make the “no cream” cream, put cold water and about a half dozen ice cubes in a large bowl. Put some more water in a pot over high heat. Add a pinch of salt if desired. Blanch half a pound of spinach in the boiling water. You’ll want to remove the spinach after about 30 seconds. Drain in a colander and immediately, “shock” the blanched spinach in the bowl of iced water. Drain and squeeze out the excess water. Then puree the leaves in a blender and set them aside. Next, put a large skillet over medium heat and add the olive oil. When the oil is hot, add the minced shallots and garlic and cover. Remove cover and stir every 20 seconds or so. Keeping them covered as they cook allows them to retain more moisture. You want to keep a close watch on them, though, as you want them to become translucent but not brown. Next, add the rest of the spinach leaves. Toss and sauté until wilted. Fold in the spinach puree. Season to taste. The original recipe calls for just salt and pepper. I’ve grown to love a hint of nutmeg in traditional creamed spinach, so I might add a pinch to this healthier version as well.

Queen Elizabeth II’s Drop Scones
(serves 16)
Flour – 4 British teacups (3 cups and a scant one quarter cup in American measurements)
Caster sugar – 4 tablespoons (Caster sugar is superfine sugar. You could put regular sugar in a food processor and pulse for 30 seconds if you want to be authentic and can’t find superfine sugar. Or just use regular sugar.)
Milk – 2 teacups (1 and one half cups plus one and one half tablespoons in American measurements)
Eggs – 2
Bicarbonate soda – 2 teaspoons (baking soda)
Cream of tartar – 3 teaspoons
Melted butter – 2 tablespoons

Preheat oven to 375 degrees. Beat eggs, sugar and about half the milk (three quarters of a cup if using American measurements) together. Add flour, and mix well together adding remainder of milk as required, also bicarbonate soda and cream of tartar. Fold in the melted butter. Using a non-stick baking sheet or a lightly greased regular baking sheet, drop tablespoon-sized lumps onto the baking sheet. Cook for 15 minutes, or until golden.
I’ve given the American equivalent to the British cooking measurements because the British teacup is smaller than the American measuring cup. If you were to use Her Majesty’s measurements and American measuring cups you’d achieve unsatisfactory scones because you’d have more dough but the same amount of leavening agents (baking soda and cream of tartar).

A note about Devonshire or Clotted Cream
You can find Devonshire Cream at British import shops and Culver City’s own Surfas restaurant supply store. Whipped cream and cream cheese are not adequate substitutes for the real thing.

Clotted cream is produced by special processing of the rich cream which rises to the surface of unpasteurized milk. Dairy cattle in the Devonshire, Cornwall, and Somerset region of England produce milk with a high enough cream content to produce clotted cream. With a 55-60 percent fat content, true clotted cream has the consistency of soft butter. It does not need to be whipped or beaten to be spreadable.

You can make “mock” clotted cream with heavy cream; cream cheese; an electric mixer, food processor or blender; and a smidgen of sugar. Necessity is the mother of invention and creativity is the daughter of great home cooking, so there are multiple versions of “mock” clotted cream available on the internet. The version below adds a pinch of salt, while another omits the salt and adds a teaspoon of vanilla. A third variation substitutes 4 tablespoons marscapone for the cream cheese. Feel free to experiment and find a version that suits your taste buds.

Combine the cream cheese, sugar and salt in a large bowl. Stir until well blended. Stir in the whipping cream. Using an electric mixer or immersion blender, beat until stiff. (Or transfer to food processor and whip there.) Refrigerate, covered, if not using immediately. Best quality if used within 24 hours.

Katie Malich is a big fan of afternoon tea and creamed spinach, although usually not at the same meal.

Ginormous. Absolutely ginormous. Ginormously ginormous. That’s all I could think as I gazed lovingly and hungrily at the displays of jumbo fresh-picked Globe artichokes at the Tuesday Culver City Farmer’s Market. At $4 a head, …[READ MORE]