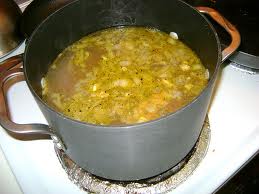 I had a request for chicken soup recipes this week. Cold and flu season definitely seems to be with us now. Buy plenty of oranges and citrus as well as dark green and orange vegetables to boost your vitamin and nutrient intake to help ward off whatever is going around. But you don’t have to be sick to enjoy a hearty bowl of chicken soup.

At times like this, canned soup really doesn’t cut it. Chicken soup just like Grandmother made is just what is called for. I don’t know about you, but the first step my Texas German grandmother took in making chicken soup was to send one of her children out to the back yard chicken coop to catch an old hen which was too tough and stringy to roast. Luckily for us urbanites who haven’t learned to prepare fresh chickens, several egg and poultry stands at the Tuesday afternoon Culver City Farmers Market sell fresh chicken. You can make a perfectly wonderful chicken stock by simmering chicken parts in salted water with onion, carrots, and celery. Or, if pressed for time, you can use canned chicken broth.

My grandmother would simmer her hen for several hours in salted water. I like to imagine her scraping carrots and trimming the ends and leaves of celery, putting the scraping, ends, and leaves in a piece of cheesecloth along with pieces of onion, and simmering them along with the chicken. While the chicken was cooking, she would chop up the carrots, celery and onion. She’d grab a handful of parsley from the back yard garden, rinse it well, and then chop the leaves. Then she’d start making spaetzle dough. When the chicken was tender, she’d remove it from the broth and set it aside until it was cool enough to handle. The hen would be skimmed and cut up. The broth would be strained, and placed back on the stove to simmer with the vegetables. She’d put another pot of water on to boil. Using a spaetzle maker (a collander works fine as well), she’d make the spaetzle in small batches, removing them with a slotted spoon and setting them aside before making the next batch. When the vegetables were done, she’d add the cut-up chicken, spaetzle and chopped parsley, turn the heat up to medium, and warm all the ingredients. The soup would be accompanied by homemade bread and pie.

Like man women of her generation, my grandmother instinctively knew the proper proportions of ingredients in many of her dishes. The following recipe, modified from one I found on the internet, is close to Grandmother’s original. The addition of unsalted chicken broth to the water boosts the flavor of the stock and reduces some of the simmering time.

STOCK:
1/2 a fresh chicken- skin on, bones in
1 qt chicken broth unsalted or low sodium
1 qt water
1 med onion- peeled, quartered
the ends and peels of 3 large carrots and 2 medium parsnips (you will use the peeled vegetables in the soup)
2 stalks celery- halved
1/4 c parsley stems
2 sprigs fresh sage and rosemary
8 sprigs fresh thyme
2 fresh bay leaves
12 pepercorns whole
SOUP
reserved carrot & parsnips- thick sliced
3 stalks fresh celery- thick sliced
2T flat leaf parsley- chopped
SPAETZLE (Noodles)
2 eggs, lightly beaten
3/4 c flour
pinch of salt
First, make the stock. Cover chicken with the broth, water, vegetables and herbs. Bring to boil and cook on medium high for 30 minutes. Skim any accumulating scum. Remove from heat. Skim fat from surface of the broth, then strain the stock. Reserve the chicken. Pick the meat from the bones and chop into bite-sized pieces. Return the broth to the pot. You should have approximately two quarts of liquid; add a little water if necessary. Add chopped vegetables and cook, covered, until vegetables are tender crisp, approximately 10-15 minutes at medium high heat. Reduce heat to low and add chopped chicken and parsley. Prepare spaetzle dough by mixing flour and salt into 2 beaten eggs. If you don’t have a spaetzle-maker, there are two ways to cut the spaetzle. You can force the dough through the holes of a colander into the boiling water. This makes fairly thin but consistent thickness of spaetzle. Or you roll the spaetzle dough into pencil-thin rolls. Using a sharp knife, cut them into small, elongated bits over water for a thicker cut. It is best to cook several small batches of spaetzle rather than one large one. Boil the spaetzle for 6 minutes or until done. Remove with slotted spoon. Set aside. To serve, place _ cup of spaetzle in each bowl and ladle hot soup into each bowl.

Katie Malich, luckily, never had to run after one of her grandmother’s old, stringy and tough hens.

Last week, in honor of the Asian New Year, I loaded up an entire cloth shopping bag with fresh oriental vegetables. My first stop was the Muoa family stand at the north-west corner of Main …[READ MORE]