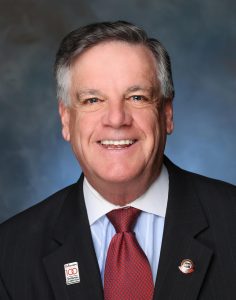 The DoubleTree by Hilton Hotel’s banquet room was sold out and there was a waitlist on Tuesday where Culver City’s 37th Annual Mayor’s Luncheon, presented by the Culver City Chamber of Commerce, took place. This Centennial luncheon event honored 2016-2017 Mayor Jim B. Clarke who, not too coincidentally, served as the founding member of the Culver City Centennial Committee in 2015.
This annual event provides an opportunity for businesses, service clubs, schools and community organizations to meet together and collectively look at our community’s programs and activities over the past year as well as the City’s accomplishments.
In addition to Mayor Jim, city council members in attendance included Vice Mayor Jeff Cooper and wife Rafia, Meghan Sahli-Wells, Thomas Small and wife Joanna Brody, and Goran Eriksson and wife Britta. Also at the head table was Agape International Spiritual Center’s Rev. Carolyn Wilkins, Director of the Culver City Area Interfaith Alliance, who offered the invocation.

Mayor Clarke spoke to the occasion, saying “Being on Council is a short term endeavor.  As you may remember I was elected to fill an unexpired term which was two years and three days and because it was three days past two years, it counted as a term.  As such, I only get to serve six years on the Council instead of eight.  But I like to tell folks that I have been able to do as much damage in six years as my colleagues can do in eight. Being Mayor is even a shorter stint of only one year as we rotate the mayorship each year.  Come next Monday night I am looking forward to once again becoming a mere mortal and turning the reins over to Mayor Jeff Cooper and Vice Mayor Thomas Small.  Congratulations or condolences to both of you whatever fits the occasion.”
Pre-luncheon entertainment was provided by the Centennial Kick-Off Parade videos, enjoyed by all. To open the program, City Manager John Nachbar introduced the Culver City Police Explorer Troop, who presented the colors, followed by the pledge of allegiance. Mayor Jim Clarke then presented a surprised John Riordan, who was the first-time honoree, the Culver City “Citizen of the Year” Award. This will become an annual honor awarded to a citizen who is neither elected nor appointed, but an individual who has consistently contributed to Culver City non-profits, individuals, or community programs for more than 20 years. Riordan received a standing ovation for his positive presence in the community.
The featured presentation of the lunch has in the past consisted of the Mayor, often with a corresponding slide show, detailing his or her challenges/accomplishments over the past year in a traditional State of the City address. This year, however, Chamber Board Chair Paul Goldstein served as moderator of a “Culver City Conversation” between Mayor Jim Clarke and Kathy Paspalis, Senior Member of the Culver City Board of Education: the successes and the challenges that face each entity, with the similarities outweighing the differences in what Mayor Jim urged everyone, in his closing remarks, to appreciate, promote and embrace Culver City as “a city of kindness…”