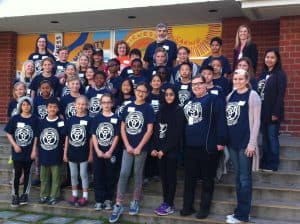 In the individual event, fourth-grader Kylar Cheng from El Marino Language School earned a Silver Metal, scoring nine out of 10 problems. Fifth-graders Julia Marcus (El Marino) and Montana Dettore (Farragut) received Bronze Metals with their scores of eight out of 10. This was one of the most difficult competitions in the 10-year history of the event, with the median score of three, meaning that 50% of all the participants scored three or less.

The problems in the competition are not typical classroom math problems. For example, in the individual event, each Mathlete had 30 minutes to solve 10 problems such as: “The perimeter of a rectangle is equal to the perimeter of a certain square. The area of the rectangle is equal to 63. The side lengths of both figures are all single digit counting numbers. Compute the area of the square.” (Answer below)

“Our goal in organizing the tournament is to create an environment where girls and boys who enjoy the challenges of mathematics can be with others who feel the same way, hopefully stimulating them to pursue STEM careers (Science, Technology, Engineering and Mathematics),” said Jason Frand, the tournament’s chairperson.

In the tournament evaluations one proctor wrote “It was great for some of the strong math students at our school to see just how many kids love math as much as they do!” another remarked, “Again, many, many thanks for providing this opportunity for so many mathletes to stretch their brains on a fun and challenging Saturday among other such scholars. Our team loved the preparation AND the actual competition, and Saturday’s event will be a lifelong memory of theirs.”

Of course, “This was fun!” was a frequent student comment heard throughout the day!

Every attending Mathlete received a certificate of participation to represent their accomplishment of being selected as a tournament participant from among the many students at their school. They also received a tournament T-shirt. Most importantly, they got the thrill and experience of academic competition in a challenging and fun environment. The tournament ends with the Math Cheer :

The Linwood E. Howe Math Tournament is sanctioned by the international Math Olympiads for Elementary and Middle Schools (MOEMS) organization in New York. The tournament committee spent months preparing for the event, and its success is due to the commitment of the committee, most specifically parent volunteer Meera Ichharam and retired principal Rosie LaBriola, as well as office manager Anissa McCullen, teacher Greg Holman and principal Dr. Kim Indelicato.

Here is the list of all the Culver City Mathletes and their chaperons: