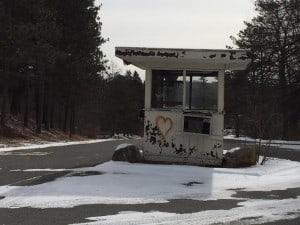 Facebook reminded me where I was last year in this time: the arrival hall at New Delhi airport. Utilizing the same mid-February weekend, this year I went east. Juxtaposed against a record-breaking eleven degrees below zero clime, Culver City was charting eighty-five degrees above zero. As my sandals awoke from their slumber in LA, my hibernating UGGs came in handy in NY; toes ensconced in lamb fuzz are happy ones. A dance festival was what beckoned; a friend recommended I attend, and then sweetened the deal by offering to pick me up at Newark airport, take me on a scenic tour through the Catskills on the way, and stop in New York City on the way back to Newark, allowing me to share mileage-paid rooms. A proposal too good to reject, this domestic destination deal was just the ticket to add to my incessant international endeavors.

As if designed to keep north-easterners warm, frolicking indoors to music and dance, I was the only attendee from Southern California. From Friday evening to Sunday evening, over 5000 dancers and musicians descended on the Saratoga Springs Hilton and Convention Center. There was non-stop contra dancing in a great hall with 800 to 1000 dancers at a time. Concurrently, there were seemingly endless other rooms with dance workshops, swing, salsa and other genres of dance, jam sessions and concerts. Vendors were in kiosks, selling dance clothes, dance shoes, jewelry, souvenirs and music. Food was for sale round-the-clock, including a Ben and Jerry’s cart rolled in as if straight from neighboring Vermont. The colonial blocks outside the venue were chock-a-block with restaurants, shops, and a museum dedicated entirely to dance, the only one of its kind in the United States.

Adding icy icing to the cake of my winter weekend in New York, my mini tour of The Catskills was equally excellent. Documentaries, fictional films and literature abound about the former glory of the nicknamed “Borscht Belt” a.k.a. “Jewish Alps.” I am interested in visiting the terrain of all (if possible in a lifetime) places where Jewish culture flourished on earth. So this home of Jewish-American humor and entertainment was definitely on my check list. I didn’t care if most of the physical buildings were already gone; that’s what you get in most formerly Jewish places. You still go and stand on the ground of the small streets (often near old town halls) in Europe named “Judengasse,” to death camp sites in Poland, to the ruins of ancient synagogues in Turkey, to the site of the obliterated Israeli embassy in Buenos Aires. I’ve been to all those and more, and I get a charge out of the chi (気) I feel on the ground.

The Catskills were no disappointment. From the first night’s hotel in northern New Jersey, I simply keyed in “Concord Hotel” on Googlemaps, and it led us straight to “Concord Street.” There was a bit of the entrance left, and as the road snaked around, you felt the expanse of the resort. It was here that I encountered the first frozen lake I ever saw, and it immediately reminded me of the scene in Little Women, by Louisa May Alcott, where the ice breaks and Amy March falls in. Coincidentally, Concord (Massachusetts) is where the author was from, and her stories are thought to have been set in the similar climes of that neighbor state.

After a brief stop for breakfast at a Greek diner we continued on the road to the site of the formerly grandiose Kutsher’s. Then finally, in best-for-last order, the most famous of them all, still standing although not accessible Grossinger’s. Many Jewish homes, including my own, have the Jennie Grossinger cookbook, a paperback that helps me make my Hamantaschen and other treats every year.

I learned that the area was not only made up of grand resort hotels, but also of little rental cottages. Jewish presence is still felt in the area, with kosher bakeries, religious camps and even Jewish community centers here and there in some neighboring towns. The forests and the waterways, the relatively flat expanses of land (despite being in the mountains), and the snow at this time of year, plus the little shtetl-like groupings of tricky-tack houses, and occasional Hebrew and/or Yiddish signs was reminiscent of Poland. No surprise that Jews, fewer generations removed from “the old country,” would be comfortable in such a place.

On the way back, my New York minute (three hours to be exact) in New York City was spent in the following way: found parking downtown (for a price), had a corned beef sandwich, a latke, and a vanilla egg cream at Katz’s deli, then walked several blocks in falling snow down Bleeker to John’s Pizza for a slice, bought a few bagels next door, and walked back to the car down Houston. As I posted my activities on Facebook, some New York friends welcomed me to town. Best President’s Day Valentine present I ever had!