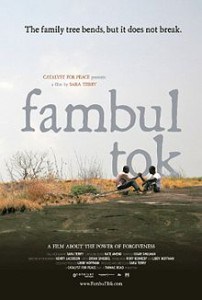 On January 23rd the Whole 9 Gallery, home of The Peace Project, will screen the documentary screen ‘Fambul Tok’ as a prelude to an upcoming workshop on radical forgiveness. Screening begins at 7 pm, and the suggested donation is $10.
The film is about an organization that aims at reconciliation and forgiveness in communities that were affected by a long-running civil war in Sierra Leone. It was directed by journalist Sara Terry. The title of the film is the organization’s name, which translates to “family talk” in the Krio language. An epilogue to the film documented the community’s reconciliation process with one of the major perpetrators of violence during the war.

Get more info and buy your ticket for the screening at www.thewhole9.com/fambultok . Details on the workshop will be announced shortly.