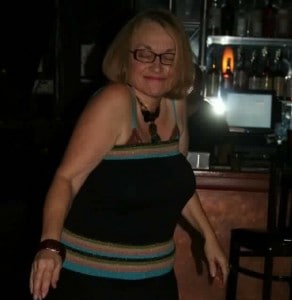 I wondered: how many essays we would be able to get written together? I uttered the question aloud to a friend who said quietly, “you’ll probably be writing the last one yourself.” There were four more we had planned before I left for my 10-day journey over Thanksgiving. I worried that Kari might not be with us when I got back, but she did a fantastic job of “liking” my incessant Facebook posts during the trip, so I knew she was okay.

Then I went to see her on Tuesday (12/1), and surmised that we wouldn’t be able to get all of the work done. Still, we agreed to meet again on Friday (12/4). Before dozing off to sleep, Kari grabbed her cell phone and calendared our date, “What time do you think you’ll be able to come?” – she was always trying to get me to commit to times and dates. In the early days of our relationship together, it was sometimes a battle between us two control freaks, but I eventually got better at committing, and she got better at not trying to make me.

We were to have done our fifth piece,”Kari Writes History: South Central blues man, his community, and early 20th century Minnesota.” But by Friday her decline had been rapid. When I went back to see her Saturday (12/5), her eyes opened, she saw me, and the biggest smile spread across her face! Then she drifted back to sleep. I stepped out to talk to her pride and joy, her daughter Leah, for a few minutes without disturbing Kari. When I went back in, she opened her arms wide for a hug. I leaned in for it, and Kari was warm and cuddly, and squeezed me with all her might in the hug, then held my hands as tight as she could. She told me she loved me, and I said I loved her too; even those last words had extraordinary depth. We’d had a conversation on our trip to New Orleans about the difficulty people have in saying “I love you.”

That essay was not to have discussed the content of Kari’s works at all; instead, we were going to discuss the meticulous process – the art – of writing a book and producing a film independently. Her beloved Bay Area is the place for publishing, and our town L.A. is the film capital of the world, and she’d organized efforts in both cities, but those traditional avenues often require you to have, or develop, special connections. That doesn’t always work for a person just starting out. You can hold your breath and wait for the traditional routes to work for you, or you can do it on your own. Ultimately, Kari wouldn’t have had the time to “hold her breath;” what a lesson for us all.

Which brings me to the next essay we were going to write. Kari and I often talked about 12-step journeys and practices relating to co-dependency and other addictive behaviors on our many after-school walks along Ballona Creek together. Co-dependency relates to people’s extraneous efforts to over-control their surroundings, which creates anxiety on one hand, but on the flip side, control issues can also spur us on to great accomplishments, even “overachieving.” Kari and I were kindred spirits in this area. Admittedly, it sometimes makes us harder to get along with, so we try to learn to temper ourselves. Kari and I were not ones to “go with the flow” very readily. However, as our bosses, our colleagues, our friends and relatives will concur: we are the “go-to” people extraordinaire. All said and done, the behavior actually accounts for one of the many reasons we all loved Kari so much. And, thank-you-very-much, I ain’t changing my stripes any time soon, either.

Kari always spoke of an amazing trip to Italy she made alone many years ago; that might have been the topic of a sixth essay if we’d gotten to it, but she didn’t seem so excited about doing a travel piece. Before that anyway, I’d wanted to explore Kari’s faith; she’s a charismatic Christian. She told me we’d do it, “articulated through George Herbert’s poetry, the subject of a 4th published work” – her Master’s thesis.” I’m not sure how that would have worked, but Kari’s own “articulate” expression of her faith inspired me on many occasions to deepen my own. A resolute adherent to Judaism, I have often been influenced by those of other faiths to allow my religion to comfort me the way I’ve seen them do. Kari’s well-worn bible was ever-present for the reading of psalms, and I’d had a chance to participate in her prayers a couple of times. After visiting Kari last Friday, I showed up at sabbath services for the first time in months.

A lovely memory: I’d gone to Brazil in 2013, which precipitated the advent of this Ruth’s Truths column itself. Having seen a comment I posted on Facebook about Sao Paolo, editor Judith Martin-Straw encouraged me to expand it into an essay. On that same trip, I’d gone to Rio and managed to capture one of the most amazing photos ever: Cristo Redentor floating atop the clouds with his inimitable outstretched arms. I posted, “this sight could almost get me to convert.” Within minutes, Kari wrote on my Facebook page, “That’s how he does it.”

Kari prayed for The Lord to take her home, which to Christians is a sign of the acceptance of fate. We all leave with unfinished business here, no matter how much we try to plan and control. I close my eyes for a moment and feel that soothing image of Christ on Corcovado. We, who still remain for a time, will be carrying on Kari’s spirit through memories we made together, and the anticipation of her intentions. Kari was a person, a force, who influenced each one of us with her vitality, creativity and care. Her soul will still comfort and guide us with that mantra (see our first essay) “What Would Kari Do.”

Kari peacefully passed away at 3:10am today, December 7th, 2015. I consider it a divine, eternal and inextricable sign of the bond of our friendship that she departed on my 57th birthday.