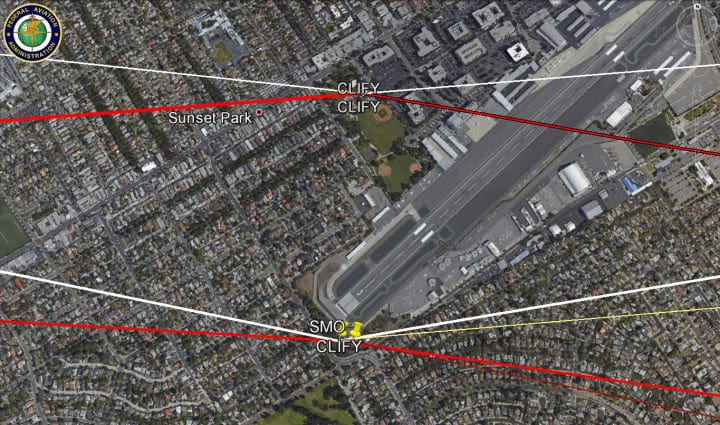 CLIFY is a satellite way-point used by IRNMN, CRSHR, HUULL & BIGBR STARs names to replace the SMO VOR- all the new satellite navigation paths RNAVs passing over Culver City. The (declared official) SMO CLIFY is on the same latitude as SMO whereas the (misplaced?) Ocean Park CLIFY shifts the arrival paths .47 miles north. Currently conventional flights cross over SMO.
A brief timeline:
The new IRNMN flight track will be an Optimized Profile Descent (OPD) until it reaches DAHJR (way point at Redondo and Blackwelder) . Over Culver City the IRNMN flight tracks from CLIFY to DAHJR will be on average 228ft higher than the current flight paths, but still 140ft lower than the pre-2012 change.
There was a slight lowering of aircraft altitudes in 2012 after the implementation of the SADDE RNAV which ends at SMO. The new proposed IRNMN RNAV will continue past SMO and increase altitudes slightly.
Currently when aircraft pass over SMO, Air Traffic Control instructs the pilots to “Descend to 2500ft”, sometimes it’s 2600ft or 4500ft- it depends on traffic and other conditions. That instruction will disappear for those Aircraft on the RNAV. They will continue on their current descent.
We will be hearing less of the engine roll back of power on the west side of Culver City. The new noise mix will include more of planes at partial power, extending flaps, and some increasing of engine power as they pass over Culver City and prepare to set up for final approach after DAHJR. Bewteen 30 and 95% with follow the new RNAV.
The Environmental Assessment is silent on how many airplanes will follow the new RNAV. A stated assumption by air traffic controllers is that only 30% of all aircraft will fly it, yet in the noise design team they make note that 90% of aircraft can fly GPS RNAV.
Southwest Airlines now flies above 7000ft over Culver City and will drop down to be one of the airlines to fly the new RNAV. Alaska Air and Jet Blue will also follow from Day One as these 3 airlines follow GPS RNAV as company policy. Delta could also be an early implementer. The potential is that 95% of the flights can, and may, follow the RNAV.
The more restrictive RNP, which which happens after DAHJR, will be followed by less planes as it requires a type of pre-certification. Also air traffic control has to approve each individual airplane request. Likely, this will be less than 30% but its not stated in the Draft EA.
Aircraft noise over the downtown neighborhoods is already concentrated due to SMO constraints. RNAV’s keep flights within a 1 mile boundary in each direction. The current spread over Culver City is 3/4 mile each direction. The current spread is likely to remain but will become more concentrated in the center due to those following the RNP. The RNP spread is 1/3 mile each direction.
The FAA’s noise analysis has errors but its value is that it can show trends. However its most important failure is that it doesn’t describe the noise effects in a way that’s understandable to the public. People hear each plane as it passes over, they don’t average noise over a 24 hour period.
Additional metrics that describe how often and when each aircraft noise exceeds a threshold of 50 or 60db would be helpful Supplemental noise metrics can help public understand changes>. Without supplying this type of information, the community can’t engage. Hopefully this would be a part of an EIR.
The following maps may help you contextualize the FAA’s expected noise effects better.
Change in Noise over Residences map
Total Aircraft noise over Population map
The total aircraft noise map makes an interesting demonstration: There is more aircraft noise, on average, in the southern part of Culver City where I live, than in the northern. South Culver City hears all the flights that happen over downtown- plus we hear the LOOP departure. What’s different is the qualitative nature of the sound.
– Stephen Murray
Culver City Representative LAX/Community Noise Roundtable
Editor’s Note – For more detailed information, go to doorstoarrival.com. The City  of Culver City is still accepting comments in regard to the proposed flight path changes. Go to www.culvercity.org/en/Articles/Lax_053115.aspx