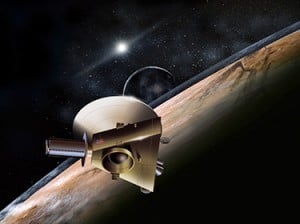 In a long series of images obtained by New Horizons’ telescopic Long Range Reconnaissance Imager (LORRI) between May 29 and June 19, Pluto and its largest moon, Charon, appear to more than double in size. From this rapidly improving imagery, scientists on the New Horizons team have found that the “close approach hemisphere” on Pluto that New Horizons will fly over has the greatest variety of terrain types seen on the planet so far. They have also discovered that Charon has a “dark pole”—a mysterious dark region that forms a kind of anti-polar cap.

“This system is just amazing,” said Alan Stern, New Horizons Principal Investigator, from the Southwest Research Institute, Boulder, Colorado. “The science team is just ecstatic with what we see on Pluto’s close approach hemisphere: Every terrain type we see on the planet—including both the brightest and darkest surface areas—are represented there, it’s a wonderland!

“And about Charon—wow—I don’t think anyone expected Charon to reveal a mystery like dark terrains at its pole,” he continued. “Who ordered that?”

“The unambiguous detection of bright and dark terrain units on both Pluto and Charon indicates a wide range of diverse landscapes across the pair,” said science team co-investigator and imaging lead Jeff Moore, of NASA Ames Research Center, Mountain View, California. “For example, the bright fringe we see on Pluto may represent frost deposited from an evaporating polar cap, which is now in summer sun.”

GRIFFITH OBSERVATORY TO CELEBRATE FIRST ENCOUNTER WITH PLUTO. On July 14, after a journey of 10 years and three billion miles, NASA’s New Horizons spacecraft will make the first-ever close encounter with Pluto. What can we expect from New Horizons as it ventures past the mysterious dwarf planet? A good way to find out is to come to Los Angeles’ Griffith Observatory, which will host several activities to celebrate the New Horizons encounter with Pluto. All events are free and open to the public.

Seating is first-come, first-served, up to the capacity of the theater. For more information visit www.griffithobservatory.org or call (213) 473-0800.