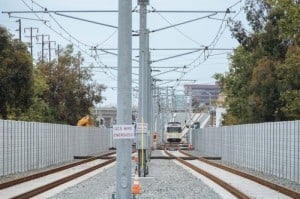 Just last month, the first-ever Metro light rail train to hit the Westside made its way along the track for the very first time (it was just a test). Now that route—the Expo Line extension to Santa Monica—is in the middle of new round of tests (for signals and other electronics) to make sure that the trains are running smoothly for their eventual opening, and that means time for more trains to ride the rails, says The Source. These photos were taken near the future Westwood /Rancho Park Station, not far from the Westside Pavillion. The completed line will add seven new stops and extend from the current terminus in Culver City all the way to downtown Santa Monica. The second phase of the Expo is expected to open in the first half of next year.