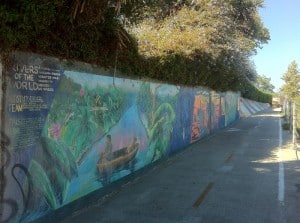 ‘Rivers of the World’ Mural Restoration Project is getting ready for a community painting event to refresh and revitalize this beloved public art work from April 16-20, 2015. It’s time to roll up those sleeves and give some wonderful Culver City art a brush of much needed TLC.

“Rivers of the World” Mural is located at Duquesne Avenue on the bike path access ramp to the north side of the Ballona Creek. In 1998, a competitive grant offered by Los Angeles County (Proposition A Anti-Graffiti Mural Projects) was offered, and applied for by the City of Culver City with the support of Ballona Creek Renaissance. The project was implemented and directed by BCR, endorsed by Culver City Unified School District and completed in 2000 by artists, employing 9 – 12th grade Culver Park High School students, and the talents of community volunteers.
The mural (ROW) has attracted many visitors traveling by bike and walking. Sadly, the mural has sustained graffiti damage, vandalism, and suffered various states of disrepair. The planned renovation will return the mural to a protected, and near-original state.
The goal is to clean, renovate, and preserve the mural. The project will remedy an inherent moisture transfer issue in parts of the wall, repair damage done by civic trucks as they access the creek from the access ramp, damage incurred by skateboarders, graffiti tagging and counteract the effects time. Coordination and painting done by non-profit groups and volunteers will strengthen community bonds by beautifying the local environment. Professional artists and contractors will work side by side with volunteers.

The mural takes on historical significance as it originally depicted a topic of contemporary interest during the time it was created. The focus was on water, and waterways, and its value as a resource. Additionally, ROW shows its visionary significance with the water issues that California began to face following the mural’s completion. The focus on water, where it comes from, and its value as a precious limited resource is of paramount importance 15 years after the mural was erected. In fact, the murals onsite creation was started Earth Day Week fifteen years ago. It is fitting for the community to be renovating it Earth Day Week 2015.
Murals created over the last several decades in Los Angeles have suffered severely from the impacts of vandalism. The climate is changing globally and improving the chances of success for a mural’s survival. There has been a “coming of age,” a renaissance, a “caring” for images that go into public spaces to be maintained for our enjoyment and appreciation. It also may be said that attention is being given to this renaissance such that the public is “aware” of the value that mural artists bring to a community in the graphic imagery being represented. Incorporating what was once thought of as “outsider art” has now found an appropriate location and audience for it to thrive and be sustained as Craft and finding institutional acceptance.
When we think of the value that that association has – we feel pride and inspiration as we set out to give a “fresh face” to this historical, handcrafted mural along La Ballona Creek in Culver City. With the ongoing support of agencies like Los Angeles Mural Conservancy (LAMC), non-profit groups like BCR, the City of Culver City, and the community who will be turning out to work on this worthwhile endeavor – we hope to really celebrate our shared community Earth Day Week 2015!