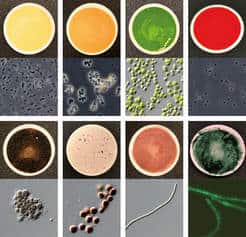 A team composed of astronomers and biologists has measured the multicolored “chemical fingerprints” of 137 different species of microorganisms in order to help future astronomers recognize life on the surface of exoplanets (planets outside our solar system).

Some of the microorganisms hail from the most extreme environments on Earth; taken together, the samples should allow for a (cautious) estimate of the diversity of biological colors on planets other than Earth. The results are available in an online catalogue and have also been published in the Proceedings of the National Academy of Sciences of the United States of America (PNAS).

Astronomers are gearing up for a new phase of exoplanet research, teaming up with biologists to formulate search strategies for life on these distant planets. So far, these efforts have focused on what are known as indirect biosignatures, such as byproducts of life that could be detectable in a host planet’s atmosphere.

But if the surface of an exoplanet were dominated by one particular life form, a more direct form of detection might be possible: a detection based on light reflected by that life form, taking on a characteristic tint in the process.

Similarly, the presence of an alien organism covering large swathes of an exoplanet’s surface could be measured directly through the imprint left by the organism’s pigmentation, the chemical makeup that determines its color. This imprint is the reflected light’s spectrum: the light split up into its component colors, as we see in a rainbow. It is the chemical analogue of a fingerprint, allowing for the identification of different types of microorganisms.

Now, a group of astronomers and biologists led by Siddharth Hegde has teamed up to explore what these fingerprints might look like and how diverse they could be. Hegde, then a graduate student at the Max Planck Institute for Astronomy, and astronomer Lisa Kaltenegger (Director of the Institute for Pale Blue Dots at Cornell University) teamed up with biologist Lynn Rothschild, postdoctoral fellow Ivan Paulino-Lima, and research associate Ryan Kent, all from NASA’s Ames Research Center, to explore the full range of possibilities for what chemical fingerprints—and therefore exoplanet surface biosignatures—could look like.

To this end, the team assembled cultures of 137 different species of microorganisms: The 137 life-forms span a variety of colors and are residents of a wide range of environments, ranging from the Atacama desert in Chile, to seawater in Hawaii, to some old woodwork at Salt Spring in Boone’s Lick State Park, Missouri.

The team reflected light off samples from each microorganism culture, measured their chemical fingerprints, and assembled their findings in an online catalog.

At the moment, it is not possible to directly measure light coming from an Earth-size planet, because this light is drowned out by the much-brighter neighboring starlight. But this database is a preparation for the not-too-distant time when such direct measurements will be possible. For now, Kaltenegger says, “this gives us for the first time a glimpse into the detectable signatures of the fascinating diversity of worlds that could exist out there.”

Eight of the 137 microorganism samples used to measure biosignatures for the catalog. In each panel, the top is a regular photograph of the sample and the bottom is a micrograph, a 400x zoomed-in version of the top image. The scientists were aiming to achieve diversity in color and pigmentation.