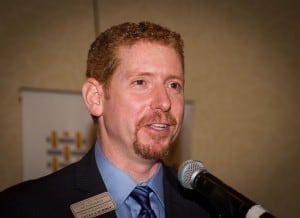 This past Thursday, January 8, the Culver City Chamber of Commerce held its annual Installation of Officers and Awards lunch for its 2015 Board of Directors. The event took place at the DoubleTree by Hilton Los Angeles Westside. Kevin Lachoff of Newmark Grubb Knight Frank, a leading commercial real estate brokerage, was installed as 2015 Culver City Chamber of Commerce Chair for the 2015 year. Mr. Lachoff, a commercial real estate leasing and sales agent, was Chair-Elect of the Chamber for 2014 and serves on Culver City’s Planning Commission. He was joined at the event by his wife, Michele; they and their two young children are also Culver City residents.

With a respectful nod to the recent tragedies in Paris, France, the event began with a Thought of the Day provided by Sue Robins, reminding the audience of the importance of the right to Free Speech, and concluding with the well-known quote from Voltaire, who in the 18th Century stated “I do not agree with what you have to say, but I’ll defend to the death your right to say it.”

Following Mrs. Robins was the Pledge of Allegiance led by California State Assemblymember Sebastian Ridley-Thomas (54th District). Assemblymember Ridley-Thomas had returned from Sacramento Wednesday evening in order to attend the Culver City Chamber lunch.
Chamber of Commerce President and CEO Steve Rose stepped up to the podium after guests had a chance to dine and socialize with the others at their tables. He introduced the crowd to newly hired Membership Director, Mary Jo Scott, and then proceeded to introduce the 2014 President’s Award. He lauded praise upon this year’s recipient, noting that the member had been quick to offer support throughout the year, from hosting Chamber mixers to providing meeting space. Mr. Rose called upon Bunnin Chevrolet’s owner Leo and son Brian Bunnin, and General Manager Ron Vartanian as this year’s award recipient. Bill Reider, 2014 Chamber Chair, followed next with a recap of some of the many highlights for the Chamber throughout 2014, including a 40% increase in new members and the success of popular events such as the Mayor’s Lunch, annual Business Expo, and Golf Tournament. Mr. Reider’s final act prior to accepting his role as Immediate Past Chair was to present the 2014 Chair Award / Member of the Year to Peg Jackson, owner of Peg Jackson & Associates, whose service to the Chamber this past year included business and continuity planning. 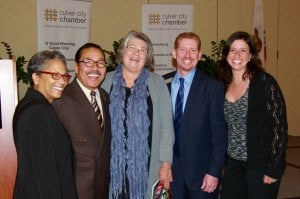 President of the Los Angeles City Council, Herb Wesson Jr., who was in attendance with his wife, Fabian. Mr. Wesson provided a number of humorous but heartfelt acknowledgments to some of the various members of the audience, and gave significant credit to his success to the early support he’d received over the years from Culver City, a springboard that has carried him far through his political career. After Mr. Wesson had administered the Oath and concluded, Mr. Weissman welcomed the newly installed Chair, Kevin Lachoff, to the podium for a few remarks. Mr. Lachoff expressed his enthusiasm for the upcoming year, and thanked both the board members for their time and dedication, and Steve Rose and Barbara Brody for the tireless effort to keep the Chamber of Commerce running strong. He called attention to his father, David Lachoff, and Mother-in-Law, Culver City Historian Julie Lugo Cerra, and wife, all in attendance,(see photo above of Mr. & Mrs. Wesson, Ms. Lugo-Cerra, and Mr. & Mrs. Lachoff)  and gave appreciation to all of those friends and business and community advocates in the audience that he credited amongst those who help make Culver City such a great place to live, work, shop, dine and play.

The afternoon event concluded with Scott Bowling of the Exceptional Children’s Foundation standing in to deliver Geoff Maleman’s Humor of the Day, ending the overall light-hearted event on an even higher note.