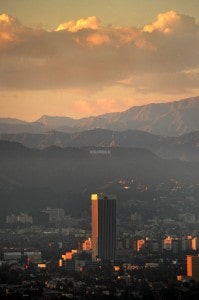 I can’t recall where I heard about the Culver City stairs. That isn’t even their official name, since they aren’t really in Culver City, but they’re well-known, and I found them at the Baldwin Hills Scenic Overlook (BHSO). I parked on Jefferson Blvd., took the trail, hiked around a few bends and stopped at a set of stairs unlike any I’d ever seen.

To begin with, they’re straight, straight up a 511-foot hill. Whole sections of the 282 steps are obscured by the steep ascent. Regardless, I set off, believing myself to be in reasonable shape from the YMCA’s gym and treadmills. I believe it was the second or third landing where I had to pause to give my heaving lungs a break and aching calves relief. When I set out again, I told myself to slow down.

That didn’t help. The steps, or risers, are in every height from 3 ½ to 20 inches, and at wildly varying distances from each other. There was no possible way to establish a rhythm to the climb, or anticipate what was coming. Twenty inches is above my knees and three inches at a perfect tripping height. I concocted the story that these were worn down, ancient stairs leading to some old mine or mansion, hand-made by native tribes or Conquistadores or something. I could find little about them online and let it go.

When the August supermoon came around this year, I decided the stairs were my way to a heavenly view. I struggled up them again, only slower, with more aforethought and less puffing.

I met Khristana Hall from Ladera Heights sitting on a bench more than half way up.

“It’s a good vertical,” she said as her 34-year-old mother Yasmin Davis agreed. They climb the stairs 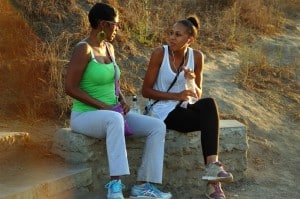 together two or three times a week, stopping at the landings to chat and catch up on family.

After I caught my breath at the top, I caught the view from the overlook, a spectacle that takes in Catalina Island 26 miles away in Santa Monica Bay, Santa Monica’s skyline and mountains, the Hollywood sign on the San Gabriel Mountains across the Los Angeles Basin, Century City and beyond. The sun was going down and lights were ramping up.

I found Pedro and Oxana, last names withheld, in the meditation garden on the top of the overlook. He has lived in Ladera Heights since he was a child. “This was a rundown area with oil derricks,” he said, as Oxana nodded, “a back alley area.”

“You didn’t walk here after dark,” she said. They agreed it changed in the 90s, around the turn of the millennium.

“It got gentrified. It’s safer,” he said. Now they come here regularly for the peace and moonrises, parking in the lot near the very modern visitor’s center on Hetzler Road, a short walk away.

Around me, folks were jogging, stretching, jumping rope, taking photos, admiring the view of Los Angeles sparkling in the twilight, meditating, chanting and watching the east, where the supermoon would appear. It was the largest of the year, when the moon was the closest to the earth and to being full. It shyly peeked from a haze of clouds behind a hill and visibly brightened the Overlook as a raucous symphony of cell phone and SLR shutters clicked away. 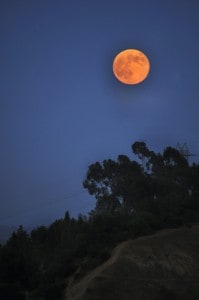 I decided to descend the unlighted stairs by supermoonlight. This proved as challenging as the climb up. I cautiously skirted the steeper steps resolved to look up the history of the Culver steps and find out why they are so difficult and ungainly.

First I found what I took to be the mismatched, haphazard ruins of a bygone era were deliberately designed just 8 years ago. They were made from concrete scavenged from a derelict Baldwin hill ravished by drilling and in the sights of developers with plans to cover it in a forest of mini-mansions.

California rescued the 58-acre parcel for $41.1 million in 2000 to restore into a rare green space for communities south of the 10. In 2006, the state spent another $10 million on the visitor’s center, trail development and reintroduction of native vegetation like prickly pear and toyon, the holly look-alike that gives Hollywood its name. In 2009, the Baldwin Hills Scenic Overlook, named for Lucky Baldwin, a land and oil speculator in the last century, officially opened its modern visitors center, trails, native plantings, meditation garden, picnic area…and those crazy stairs driving straight through the conventional path that loops to the top.

I found stories about the expense, the protection of vanishing green space in LA, the buildings, the visitors center and the programs planned for the state’s newest park, number 280 in its 150-year history, but almost nothing about those stairs.

Two score moon fans chorused Ooos and Ahhhs as the supermoon rose over a hill in the Kenneth Hahn Recreation Area in August. That there were trees and a hill between the Overlook and the moon made it appear even larger, phenomenon scientists acknowledge but cannot explain.

I also had something that needed explaining.

Go see them Monday or Tuesday. The Harvest moon always gives two or three bright nights for viewing and this supermoon will be extra big and bright both nights. If you don’t want to climb the stairs, stop to look. See if you can figure out why they are so challenging. I’ve decided that’s their explanation, to present a physical challenge in a car-based society.

If you miss this supermoon, the next one will rise Sept. 27, 2015. Or enjoy the blood moon of October from the Overlook. The full eclipse of the moon is on October 8, but drive or take the trail since it occurs between 3:30 and 4:30 a.m. and the stairs will be dark.

And even more challenging.