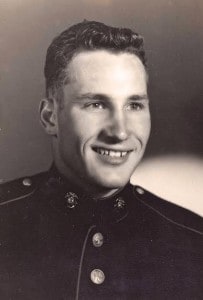 Dale Jones, born Harry Dowe Jones, passed away peacefully on August 25, 2014 at the age of 82 at his home in Maricopa, Arizona. Born on September 7, 1931 in Litchfield, Arizona to Charles and Audrey Jones, Dale’s father died before he was born and his mother when he was just two years old. He and his brother Charles were sent by train to Los Angeles where they lived in several foster homes, sometimes together and others times separately. During this time Dale took refuge with the Cox Family, where Roy and Lillian treated him as a son and their four children as their brother. At the age of 12 he and Charles moved to the Masonic Home for Children in Covina, where they lived with more than 300 other children. Dale graduated from high school in 1949 and immediately he and his best friend, Jimmy Cox, joined the Marine Corps and headed out to fight in the Korean War. In 1952 Staff Sgt. Jones was honorably discharged. He would later recount some of the stories of his childhood and service to his country to his children, saying that these years were the years that helped form his character.

Upon leaving the Marine Corps Dale started his college career at Mt. San Antonio College (Mt. SAC) where, as a javelin thrower, he was awarded a track and field scholarship to USC. During his time at USC, his track and field teams were named the nation’s best. Dale graduated from USC in 1958 with a Bachelor’s degree in Public Administration, later receiving his Master’s degree.

Following college Dale worked for the FBI, followed by Standard Oil, and then the USC Career Center. While at the Career Center he came across an opening for Purchasing Officer and Budget Analyst at the City of Culver City. He took the nationally advertised test, passed with the highest score, and began working for the city in 1962. He advanced to Chief Administrative Officer/City Manager four years later and executed this position for 26 years retiring in 1992, the longest-serving CAO in California’s history.

In 1961 Dale Jones and Virginia Bautista married and had three children, Colleen Marie, Ronald Dale, and Robert Allen. Dale and Virginia were married for 13 years and remained friends thereafter.

Dale was always active in his city and cared for it very much, belonging to the Culver City Lions Club, Culver City Jaycees and the Culver-Palms Family YMCA. He was also very active in the Sister City Committee making friends all over the world, especially in Japan. Additionally, he raised thousands of dollars for two orphanages in Mexico, one in Uruapan, Michoacan and one in Puerto Escondido, Oaxaca. 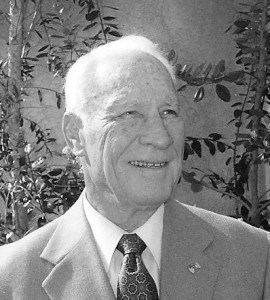 five days before Dale’s passing. Dale and Eleanor enjoyed their marriage, living Culver City, then in the mountains of Mariposa, California and finally in Maricopa Arizona, just outside of Phoenix. During his life in Maricopa, Dale again became an active part of his community serving on the planning commission and then developing and heading the Park Rangers.

The wonderful qualities for which Dale will be remembered – being kind and generous to all, not desiring to be known, but taking a genuine interest in his neighbor; a caring husband and father, and so much more – are attributes that he has instilled in family and friends alike, a legacy that will continue to be passed on to future generations.

The family invites you to join in remembering Dale. Two memorial services will take place:

Attire: Dale Jones Style – casual (or dress up if you like)