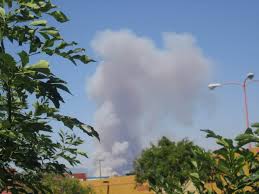 Firefighters from Culver City, Los Angeles city and county responded to a quarter-acre brush fire that broke out Oct. 21 in the Baldwin Hills/Culver City area, but the flames were quickly extinguished. According to City News Service, there were no injuries or damage.

The vegetation fire broke out near the oil fields behind Bill Botts Field, near the intersection of Stocker Street and Fairfax Avenue, about 4:50 p.m., according to city fire department spokesman Erik Scott and Culver City police.

“We dispatched 11 fire engines and trucks, two helicopters, one rescue ambulance and two battalion chiefs to the fire but I don’t know what resources were actually used on site,” Scott said.

Marrujo said firefighters were still on scene with hand crews mopping up hot spots. A knockdown was declared at 5:28 p.m., he said.

Blair Hills resident Crystal Alexander noted “This is the third time this year …There was a fire there one week ago and then again [back] in April. What is going down?”

The cause of the fire remains under investigation.The previous two blazes were attributed to dropped power lines from SoCal Edison equipment.

According to Mayor Jeff Cooper, “The cause is electrical. At this point, Freeport Mac MoRan [the oil company that now owns the Baldwin Hills oil field] will be looking into inspecting the electrical connections to the wells and making sure that things are secure.” Cooper was still waiting for information from representatives from SoCalEdison and the Los Angeles Department of Water and Power.