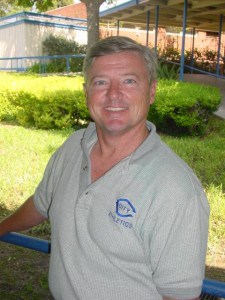 Culver City High School will rename its newly renovated stadium Jerry Chabola Stadium to honor the school’s longtime athletic director in a halftime ceremony during the October 4 home game versus Bishop Amat High School. The Centaurs will also retire the No. 5 jersey of Michael Bumpus, who was named the CIF Division X Player of the Year in 2003.
Chabola graduated from St. Mary’s College of California, majoring in economics and government and landed a teaching job that included coaching three sports. He left teaching for several years to work at Tower Insurance, the business he bought with his wife, Janet, but he never left coaching. He spent time coaching Little League baseball and softball for his own kids and even started the girls softball program in Culver City
Chabola ultimately returned to teaching and coaching at Culver City High School, eventually becoming the school’s the Student Body Advisor, Athletic Director, Interact Advisor and a founding member of the school’s Vanguard Academy. He served as a volunteer football coach, varsity baseball coach, and girls soccer coach. The high school became “his home away from home,” and his devotion to his vocation was amazing. He was named the first “Teacher of the Year” by the Culver City Education Foundation.
Ten years ago, Jerry started volunteering as “Santa” for the CCPD Christmas sleigh with the assistance of his grandchildren “elves” and served in a variety of other roles, including one term with the Culver City Parks & Recreation Commission, School District Liaison to the City, CIF Liaison for the School District, President of the South Bay Athletic Association, President of CC Babe Ruth, Co-Founder of the CCHS Booster Club, Interact Advisor for 21 years and Co-Founder of “Best Buddies” at CCHS. He even spearheaded the “Every 15 Minutes Program” at CCHS – a program to encourage students not to drink and drive.
Chambola’s favorite role in life is that of being a family man and “Papa” to his six grandchildren. He retired from teaching after 22 years at Culver City High School, including 19 years serving as the school’s 22 Athletic Director.
Michael Bumpus lettered in four different sports for the Centaurs, including football, basketball, soccer, and baseball. As a junior, he hauled in 75 passes for 1,081 yards and 11 touchdowns, recorded two interceptions and was Culver City’s punter, maintaining a near 40-yard average. The following year, he helped Culver City to a 9-2-1 record and played wide receiver until the third game of the season, when he took over at quarterback due to injuries. Bumpus rushed for 800 yards, passed for 160, and had 170 receiving yards, while scoring 13 touchdowns. He was named the Southern Section’s Division X offensive player of the year and was ranked the No. 15 wide receiver nationally by TheInsiders.com.
Bumpus went on to star for the Washington State Cougars, where he earned All-Pacific-10 Conference honorable mention his senior year and was named WSU’s offensive co-MVP. He finished the 2006-2007 season with 60 receptions for 558 yards and one touchdown to lead all Cougar receivers. He also led the team with 13 punt returns for 72 yards.
Bumpus signed with the NFL’s Seattle Seahawks as an undrafted free agent in 2008. He played in four NFL games over two seasons, catching five passes for 48 yards, including a 10-yard touchdown grab against the St. Louis Rams.