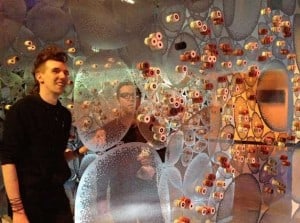 Join us for the opening reception of the North American premiere of Interference, a large-scale, physical game installation by architect Nathalie Pozzi and game designer Eric Zimmerman. Interference will be exhibited at Track 16 Gallery and is presented in partnership with USC Visions and Voices: The Arts and Humanities Initiative and IndieCade 2013, The International Festival of Independent Games. This presentation of Interference was initiated by former LACE Executive Director Carol Stakenas.

Interference is a strategic social game where you win by stealing from other players. Five suspended, super-thin steel walls dotted with organic patterns resembling cell tissues act as vertical game boards. The twist is that each turn you must steal a piece from another game going on between other players. While each game takes place in a local area of one of the walls, the games themselves can move across the walls – and games even collide with each other as they drift across the walls’ surfaces. Interference encourages players to negotiate, argue, and scheme with and against each other, across physical space, social space, and the spaces between games.