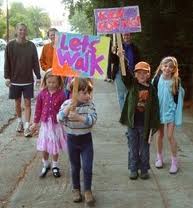 Walking and bicycling projects will receive a 35 percent boost in state funding through legislation signed by Governor Jerry Brown last week. The bill establishes a new Active Transportation Program funded by $130 million in the first year, including a minimum of $24 million for Safe Routes to School projects and no less than 25 percent to benefit disadvantaged communities.

This is a truly impressive win, especially after dedicated federal funding for Safe Routes to School was eliminated and California seemed poised to follow suit. And, with a new Active Transportation Program, we have the opportunity to work with the Administration and the Legislature to continue expand future funding through means such as cap and trade proceeds.

California made a significant shift in transportation policy toward greater focus on making pedestrian and bicycle travel safer and easier by enacting the Active Transportation Program.

We couldn’t have done it without you!

At key milestones in the campaign to preserve Safe Routes to School funding and a focus on walking and bicycling, we called on your support and you responded by:

Signing a petition to Governor Brown with 7000 other people and 155 organizations
Participating in Advocacy Day with 40 other advocates to educate 65 state legislators and their staff on the benefits of Safe Routes to School
Attending seven key legislative committee hearings along with dozens of advocates
Calling Governor Brown and your legislators to voice your concerns at key times
Sending nearly 50 letters of support for AB-1194, the Safe Routes to School Bill

Thanks to you, this groundswell of support was heard loud and clear in the Capitol and propelled statewide advocates, legislative staff, and administrative staff toward crafting this transformational new program that builds on the successes of the previous programs.

For more information on what this achievement means for the future of California: