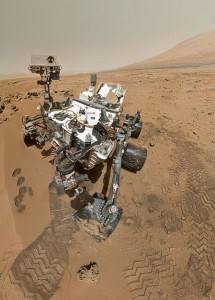 The team operating NASA’s Curiosity rover on Mars has selected a second target rock for drilling and sampling. The rover will set course to the drilling location in coming days.

This second drilling target, called “Cumberland,” lies about nine feet west of the rock where Curiosity’s drill first touched Martian stone in February. Curiosity took the first rock sample ever collected on Mars from that rock, called “John Klein.” The rover found evidence of an ancient environment favorable for microbial life. Both rocks are flat, with pale veins and a bumpy surface. They are embedded in a layer of rock on the floor of a shallow depression called “Yellowknife Bay.”

The second drilling is intended to confirm results from the first drilling, which indicated the chemistry of the first powdered sample from John Klein was much less oxidizing than that of a soil sample the rover scooped up before it began drilling.

Although Cumberland and John Klein are very similar, Cumberland appears to have more of the erosion-resistant granules that cause the surface bumps. The bumps are concretions, or clumps of minerals, which formed when water soaked the rock long ago.

Mission engineers at JPL recently finished upgrading Curiosity’s operating software following a four-week break. The rover continued monitoring the Martian atmosphere during the break but the team did not send any new commands because Mars and the Sun were positioned in such a way the Sun could have blocked or corrupted commands sent from Earth.

Curiosity is about nine months into a two-year prime mission. After the second rock drilling in Yellowknife Bay and a few other investigations nearby, the rover will drive toward the base of Mount Sharp, a 3-mile-high layered mountain inside Gale crater.

THE RED PLANET has fascinated me ever since I took part in a play called “A Funny Family on Mars,” written, acted, and produced (for parents) by my 4th-grade class. I was chosen to play the part of an Earth-boy who, with his sister, builds a space ship and flies it to Mars. There we meet a Mars-boy named Cumbo Abba, played by a kid with the brightest red hair you ever saw!

Those were days when so little was known of Mars that anything seemed possible. The depiction of Mars in fiction had been stimulated by the planet’s dramatic red color and by nineteenth-century scientific speculations that it might support intelligent life. Thus originated a large number of science-fiction scenarios, among which was H. G. Wells’ The War of the Worlds, published in 1898, in which Martians seek to escape their dying planet by invading Earth. A subsequent radio adaptation of The War of the Worlds on October 30, 1938, by Orson Welles was presented as a live news broadcast, and became notorious for causing a public panic when many listeners mistook it for the truth.

Have Martians ever existed? Not likely, at least according to the evidence so far unearthed (an odd word, when referring to Mars). Perhaps the “Martians” will ultimately be what Ray Bradbury so poignantly suggests at the end of the last episode of his Martian Chronicles—where a family of colonists from Earth look at their reflections in a canal and realize, “We are the Martians!”

Despite all our exploration, all the mysteries involving Mars will probably never be resolved. Here’s one, for instance: Author Jonathan Swift made reference to the moons of Mars, detailing reasonably accurate descriptions of their orbits, in the 19th chapter of his novel Gulliver’s Travels—about 150 years before their actual discovery.