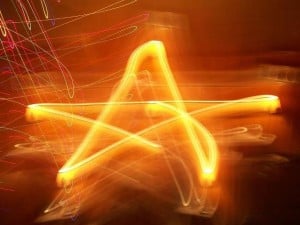 As the crowd began to gather at Sony Studios for the the 31st Annual Culver City Education Foundation “Tribute to the Stars” on May 11, the evening was already a success. Smiling faces, exclamations of “Congratulations!” echoed by loud and happy thank yous were all over the street scene. Teachers, parents, secretaries and coaches gathered for awards, auction prizes, and lots of really lovely food.

The opening reception had Culver City’s perfect host, Alan Schulman of Akasha. He has a way of wrapping himself in his jacket and pacing, almost an expectant father in the waiting room, while his food is being prepared for presentation. As soon there’s a glass in your hand and a bite in your mouth, he relaxes and smiles the question that’s just been answered – Isn’t that great? The beautiful assortment of cheeses and wines had conversations flowing until it was time to step into the Cary Grant Theater for the main event.

Steve Zee, El Rincon parent, tap dancing master and former Presidential candidate (really-) took over the Master of Ceremonies post with humor, flair and film (produced by Molly Wyant) highlighting the contributions that CCEF has given to the CCUSD schools in the past year.

Sony Pictures Entertainment 2013 Teacher of the Year award went to second grade teacher from El Rincon,  Marshanne Kendrick Love. Accepting the award from Sony’s Janice Pober, Love was full of gratitude for all of those who taught her, and for her school and her students.

Rotary Club of Culver City Classified Employee of the Year Award was given to Culver High School’s, JoNellia Guinn. Her introduction by Leslie Lockhart, the district’s assistant superintendent of human resources, included that highly prized information that JoNellia has a jar of candy on her desk, and it’s there for everyone.

School Volunteers of the year went to Gina Marie Walker of El Marino, Ali McCann of El Rincon, Lisa and Steven Levin of Farragut, Monkia Okker of La Ballona, Michelle Lucas of Linwood E. Howe, Bonnie Wacker of CCMS, Nancy Burne of CCHS, May Woo of the Adult School, and at the Office of Child Development, Megan Rawls.

After a brisk and profitable auction, the crowd poured out to the street scene again for eating, drinking, dancing, and talking, with some talented folks getting all four in at the same time.

From the delightful roasted carrot salad from Akasha all the way to the end of the road with an amazing coffee and cream gelato from Bulgarini Gelato Cafe, every taste was a competition for the top. Platine Bakery’s fantastic macarons were shoulder to shoulder with the red velvet cake balls from Essential Chocolate Desserts. LYFE Kitchen offered a chocolate and fig pudding that was remarkable, and many people almost didn’t get past the first table with Mr. Ardis Catering offering a beef brisket better than your grandma’s. The Culver Hotel was an amazing standout with ahi tuna tacos served in crisp won ton wrappers, but the best bite of the night was Waterloo and City’s simple but perfect ravioli and peas. Chasing that with Zevia’s terrific ginger ale, it was the perfect moment for a balloon pop; the piece d’resistance fundraiser where popping a balloon got you a great chance at a prize.

Even a beautifully scripted crowd scene could not have seemed like so much merriment. Sony, the CCEF, and all the restaurants in town made a night to applaud our schools an affair to remember.